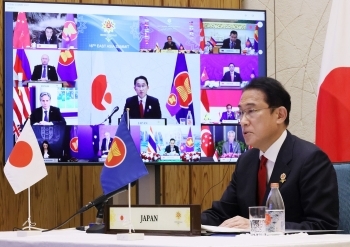 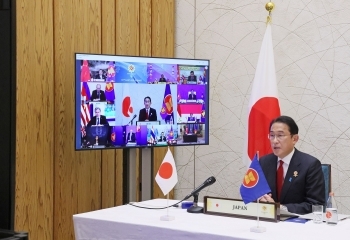 On October 27, commencing at 8:00 p.m. for about 2 hours and 10 minutes, Mr. KISHIDA Fumio, Prime Minister of Japan, attended the 16th East Asia Summit (EAS) which was held via video conference and chaired by His Majesty Sultan Haji Hassanal Bolkiah of Brunei Darussalam. An overview of the meeting is as follows.

In his remarks, Prime Minister Kishida said that he will work with EAS Leaders to vigorously advance a "free and open Indo-Pacific." He also stated that he was encouraged that ASEAN had exercised its centrality and unity and made its own guidance clear by issuing the "ASEAN Outlook on the Indo-Pacific (AOIP)" at the recent time when the rule-based order is being shaken and regional instability has become apparent.

2. Support for countermeasures against COVID-19 pandemic

Prime Minister Kishida expressed his intention to continue to enhance cooperation toward the realization of fair and equitable access to effective, safe and high-quality vaccines and the establishment of a robust and inclusive healthcare system, through assistance such as the provision of vaccines to ASEAN countries, "Last One Mile Support," and support for the establishment of the ASEAN Centre for Public Health Emergencies and Emerging Diseases.

3. ASEAN Outlook for the Indo-Pacific (AOIP)

Prime Minister Kishida then stated that Japan highly valued the AOIP, which upholds values such as openness, transparency, inclusiveness, and the rule of law. He reiterated full support for AOIP, which shares the fundamental principles with the "Free and Open Indo-Pacific (FOIP)." He said that Japan and ASEAN were currently advancing concrete cooperation, based on the ASEAN-Japan Joint Statement of AOIP Cooperation, which contribute to the principles of AOIP, , and that Japan had just issued a Progress Report on 73 concrete cooperation projects.

Finally, Prime Minister Kishida stated that EAS is a premier forum where the leaders of each country frankly discuss regional political security issues, and that Japan will continue to advance cooperation through the EAS framework.