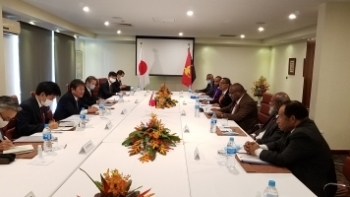 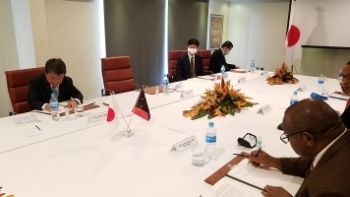 Mr. MOTEGI Toshimitsu, Minister for Foreign Affairs of Japan visited Papua New Guinea from August 20 to 21. The overview is as follows.

On August 21, commencing at 10:07 a.m. local time (9:07 a.m. Japan time) for approximately 1 hour, Minister MOTEGI held a meeting with the Hon. James Marape MP, Prime Minister, in the capital city, Port Moresby. The overview is as follows. At the end of the meeting, Minister MOTEGI signed “Statement of Intent to Further Promote Bilateral Relations between Japan and Papua New Guinea” (English (PDF)

At the outset, Minister MOTEGI noted that this visit underscored the importance Japan attached to PNG and expressed his gratitude for PNG’s hospitality and for the support from the PNG government for the repatriation of Japanese citizens by chartered Air Niugini flight in April this year.

Prime Minister Marape welcomed Minister MOTEGI’s visit as an opportunity to further strengthen the relationship between the two countries and expressed appreciation for Japan’s longstanding support for PNG.

The ministers’ wide-ranging discussion included economic issues such as liquefied natural gas (LNG) production and measures aimed at an early recovery of PNG’s economy from the effects of COVID-19. The recovery of the remains of war dead and cooperation in the international fora were also discussed. Both sides expressed the desire for close cooperation in the run-up to next year’s 9th Pacific Islands Leaders Meeting (PALM9).

The two sides exchanged views on regional affairs, including North Korea issues, and shared the intent for continued close coordination. In connection, Minister MOTEGI sought understanding and cooperation for the early resolution of the abductions issue, to which Prime Minister Marape expressed his support.