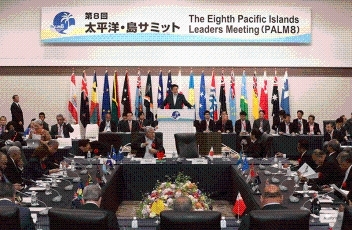 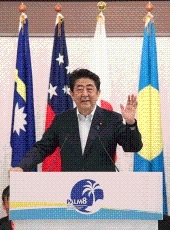 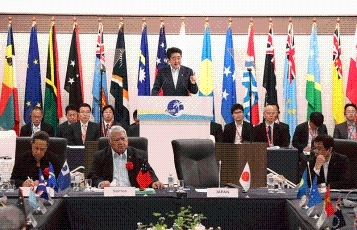 My friends, the PALM8 Summit has now begun.

May I ask the leaders of New Caledonia and French Polynesia to stand up?

We wish to welcome your participation with a round of applause.

And Prime Minister Tuilaepa, it is an honor to be chairing with you our PALM8 Summit.

The Pacific Islands Forum, which met recently in Prime Minister Tuilaepa’s country of Samoa, has come up with a new concept of “Blue Continent.”

It means the "Pacific Ocean." It is an expression, isn't it, brimming with great respect for the vast blue ocean.

Let us all champion “saving the blue” more, embracing the same passion by which we urge people to “save the green.”

That is because the ocean is crying out in despair.

PCBs are being detected in high concentrations in creatures dwelling at a depth of 10,000 meters below the ocean surface. The medium for this? Some say that's microplastics.

Plankton and shellfish have decreased in number, because the seawater has gotten less alkaline, and that's because humankind has had the oceans absorb an inordinate amount of carbon dioxide.

And, in a mere 40 years, marine resources subjected to illegal and reckless overfishing have also increased to three times the previous level.

This is taking place not only in high seas but also within your own EEZs, with lawless foreign fishing vessels continuing their indiscriminate activities.

Then there is the issue of deep sea bed resources. Even though the development of such resources might well damage marine ecosystems in an irreversible way, we have yet to have a governance system that needs to be put in place.

Acidification of the ocean and sea level rise impact PALM nations directly. And should the seas become a lawless place, the nations of PALM will suffer a serious blow.

Once again, may I call upon you to make the PALM process a venue for finding solutions for those problems we all share.

In order to prevent the degradation of our seas and the trampling of the rule of law, shall we not take a step forward towards action?

Three years ago here in Iwaki, Fukushima, I made a pledge to you.

I promised that Japan would carry out a minimum of 55 billion yen, or roughly 460 million US dollars, in assistance and also engage in human resource development and people-to-people exchanges of 4,000 people.

To build Pacific Climate Change Centre, or PCCC, on the campus of SPREP, headquartered in Samoa, for the purpose of fostering specialists prepared to take on climate change, is one part of that PALM7 commitment I made to you.

Let me now tell you that the PCCC had its groundbreaking last week, and I wish to celebrate that with you all. The Centre will be of foremost international importance as a base for keeping a watchful eye on climate change.

We all know that climate change is among the most urgent concerns for Pacific island nations. Japan's cooperation on this matter through Taranoa Dialogue, for instance, will continue, I assure you.

Where Japan wishes to place emphasis from now is, first of all, in establishing the rule of law in the maritime order.

Since ancient times, it is the Pacific Ocean that has given us blessings of the sea. And it is the rule of law that gives protection to the nations, big and small, for their inherent rights.

Japan will be unstinting in its assistance towards improving countries’ capacity to “protect the sea,” including each country’s legal enforcement capabilities.

I would like to ask all the leaders here to give special consideration to Japan’s fishing activities. At the same time, regarding assistance to enhance your guarding capabilities and your capacity to conserve resources, I believe Japan has a role it can play with confidence and pride.

Second, Japan will work to develop quality infrastructure in both “hard” and “soft” aspects so that you are able to realize sustainable prosperity in a self-reliant manner.

And third, we will enhance people-to-people exchanges further and work together with you all to cultivate leaders who will shoulder the future of the PALM nations. Over the next three years, until we gather for the next PALM, Japan intends to work to foster human resources and exchanges for more than 5000 people.

My friends, it is nothing more than an artificial, expedient custom to distinguish between one stretch of water we call the Pacific Ocean and another we deem the Indian Ocean. The two are one and the same, as a matter of course.

It was the ancestors of the PALM peoples that in the long-distant past brought about the “confluence of the two seas” through trade.

There is a theory that a word in Tanzania, “huti,” was originated from the Polynesian word “punti,” both of which mean “banana.”

Bananas found their way from the Pacific islands to the eastern coast of Africa. It was the ancestors of the PALM peoples, the greatest ocean navigators the world has ever known, that brought them there.

The “Blue Pacific” where we make our home is one and the same as the “Blue Indian Ocean.” Opportunities and possibilities coexist in these two seas, and the questions to be worked out and the growing crises stretch across both oceans, unable to be separated.

On this occasion, shall we not -- each and every one of us -- take on an expansive oceanic identity by which we view the two oceans holistically?

That will expand our field of vision geographically. It will impart to us a viewpoint by which we look at the system of the vast seas with a very long term perspective.

It has been 21 years since the PALM process began.

We have arrived here just as if we were in a long-distance relay race, passing the baton along as we run.

The PALM process is an unbroken stream that flows thanks to the efforts of countless people in both Japan and Pacific island nations, including those at the grassroots level as well as those in business and academia. I wish to end my remarks to you by expressing my heartfelt thanks for the tireless efforts of those who have come before us.