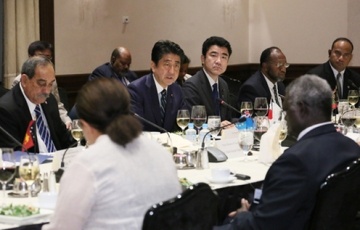 On Tuesday, September 20, commencing at 12:15 p.m. (local time) for 55 minutes, Prime Minister Shinzo Abe held the third Japan-Pacific Islands Leaders Meeting at the New York Marriott East Side during his visit to New York, exchanging opinions with Pacific islands countries’ leaders. The overview of the meeting is as follows.

1. In his opening remarks, Prime Minister Abe explained that various commitments and cooperation announced at the Seventh Pacific Islands Leaders Meeting (PALM 7) are steadily making progress and that the secure and prompt implementation of promises is Japan’s strength. He also called for cooperation in making the PALM 8 in 2018 successful and made the following points regarding common challenges facing Japan and Pacific island countries.


2. In response, the participating countries' leaders appreciated the contributions that Japan has been making thus far via the PALMs and welcomed the steady follow-up on the PALM 7. They also expressed expectations on Japan’s enhancement of cooperation with the Pacific region in areas such as disaster risk reduction, climate change and environment, sustainable development, maritime issues and fisheries, human resources development and regional access. Furthermore, they commented on North Korea, the rule of law at the seas, the United Nations reform and other matters in response to relevant remarks by Prime Minister Abe.

3. In response, Prime Minister Abe expressed that he renewed strong recognition on the significance of Japan’s partnership with the Pacific Island countries and that Japan would like to continue high-level dialogues with these countries.