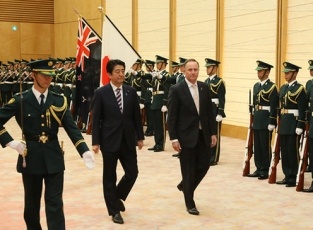 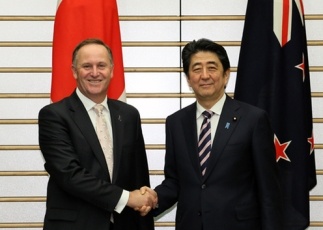 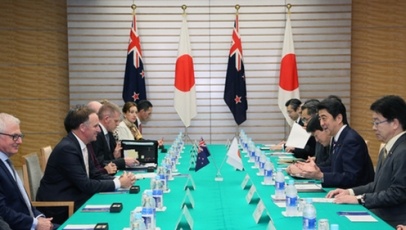 On March 24, commencing at 6:15 p.m. for approximately 45 minutes, Prime Minister Shinzo Abe held a summit meeting with the Rt Hon John Key, Prime Minister of New Zealand, during his visit to Japan. The overview of the meeting is as follows.

Prime Minister Abe expressed gratitude for the welcome he received when he visited New Zealand last year in July, and hoped Prime Minister Key’s visit to Japan would be an opportunity to further advance the Japan-New Zealand relationship as strategic cooperative partners in the Asia-Pacific region.

Prime Minister Abe, recalling that this year marks the 70th anniversary of the end of World War II and the founding of the United Nations, expressed Japan’s determination to continue contributing to the peace and prosperity of the world as a peace-loving nation. The two leaders shared the view that the two countries will work together to address various global challenges, including climate change and nuclear disarmament and non-proliferation.

Additionally, the two leaders exchanged views on sport and sister city exchanges, and shared the view that they will cooperate toward the success of the 2019 Rugby World Cup and 2020 Olympic and Paralympic Games, which will be held in Japan.

The two leaders confirmed they would collaborate for an early conclusion of the Trans-Pacific Partnership (TPP) negotiations, and shared the view that they will cooperate toward the goal of completing the Regional Comprehensive Economic Partnership (RCEP) negotiations by the end of this year. Furthermore, they welcomed the cooperation moving ahead in the fields of food and agriculture, which was mentioned at the summit meeting last year.

Prime Minister Abe asked for cooperation toward the success of the 7th Pacific Islands Leaders Meeting (PALM7), to be held in May. Prime Minister Abe also said that, as both countries have experienced earthquake disasters, Japan would like to cooperate with New Zealand to support Pacific Island countries that are vulnerable to natural disasters; Prime Minister Key agreed. The two leaders shared the view that they will work together for the rehabilitation and reconstruction of Vanuatu, which suffered serious damage in the recent cyclone.

5. Security and the fight against terrorism

Prime Minister Key offered his condolences to the Japanese victims of the shooting terrorism incident in Tunisia, and the terrorist incident regarding the murder of Japanese in Syria, to which Prime Minster Abe replied with appreciation. The two leaders confirmed they would strengthen cooperation in the fields of counter-terrorism and security in collaboration with the international community.

6. Cooperation in the international arena

The two leaders also exchanged views on COP 21 and whaling.