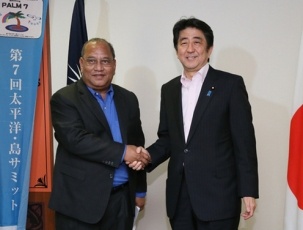 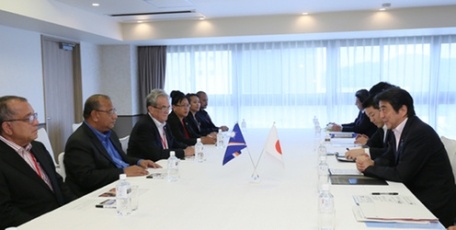 On May 22, commencing at 3:40 p.m. for approximately 15 minutes, Prime Minister Shinzo Abe held a summit meeting with H.E. Christopher J. Loeak, President of the Republic of the Marshall Islands, who is visiting Iwaki City, Fukushima Prefecture to attend the 7th Pacific Islands Leaders Meeting (PALM 7). The outline of the meeting is as follows.

2. In response, President Loeak stated that it had been a great honor to meet with Their Majesties upon their visit to Palau and that the visit had provided an opportunity to further deepen the bonds between Japan and the Micronesian region. President Loeak also demonstrated his determination to cooperate towards the success of PALM 7.

3. Prime Minister Abe conveyed his Government’s intention to provide 400 million yen in funding climate change and disaster risk reduction measures, noting that Japan would continue to provide robust support for the sustainable development of the Marshall Islands. President Loeak expressed his appreciation for the assistance from Japan along with his determination to also further strengthen the people-to-people exchanges with Japan.

4. Prime Minister Abe requested cooperation on Japan’s proposal to the United Nations regarding the World Tsunami Day, to which President Loeak expressed his support. The two leaders also exchanged views on various issues in the international community including climate change, fishery and the UN Security Council reform as well as on cooperation for the recovery of the war dead remains.

Page Top
Back to Japan-Marshall Relations