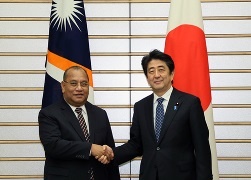 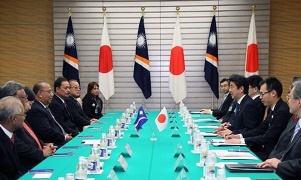 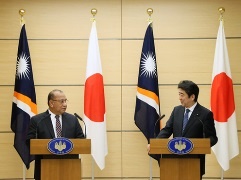 On February 14, commencing at 6:15 p.m. for approximately 30 minutes, Mr. Shinzo Abe, the Prime Minister, held a meeting with H.E. Mr. Christopher J. Loeak, President of the Republic of the Marshall Islands, who is on his official working visit to Japan. Following the meeting, Prime Minister Abe held dinner with President Loeak from 7:00 p.m. for approximately 75 minutes. An overview of the meeting and dinner is as follows:

1. Prime Minister Abe welcomed President Loeak’s visit to Japan and stated that he would like to further develop the relationship with the Marshall Islands, which is also a Pacific island country and has a special relationship with Japan. Prime Minister Abe also stated that he would like to cooperate with the Marshall Islands more to resolve regional and international issues such as climate changes and disarmament.

2. In response to the above, President Loeak expressed his gratitude and stated that it was meaningful that he was able to visit Japan on the year following the 25th anniversary of establishment of diplomatic relations between the two countries and he would like to deepen friendship with Japanese people.

3. The two leaders shared the view that they would cooperate toward the “Pacific Islands Leaders Meeting” to be held in Iwaki City, Fukushima Prefecture, in May next year and continue their cooperation in repatriation of remains of the war dead from World War II and in the field of fishery.

4. Moreover, the two leaders exchanged opinions on regional situations and cooperation in an international arena and confirmed the importance of the “rule of law” in the Pacific region.

5. Mr. Yoshiro Mori, former Prime Minister, who has connections with the Marshall Islands, and Mr. Kazunori Tanaka, chairperson of the Japan-Marshall Islands Parliamentary Friendship Association, joined the dinner following the meeting and held talks on exchanges between the two countries and strengthening of the relationship in a friendly atmosphere.