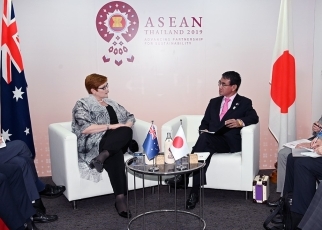 On August 1, commencing at 6:30 p.m. for approximately 20 minutes, Mr. Taro Kono, Minister for Foreign Affairs of Japan, who is visiting Thailand to attend ASEAN-related Foreign Ministers’ Meetings, held a Foreign Ministers’ Meeting with Senator the Hon Marise Payne, Minister for Foreign Affairs of the Commonwealth of Australia, who is also in Thailand. The overview of the meeting is as follows.

1. At the beginning, Minister Kono conveyed his congratulations on the victory of the Coalition in the May federal election. Minister Kono welcomed that Prime Minister Morrison’s foreign policy speech in June shares the same vision as that of Japan, and stated Japan’s intention to continue to work together as “Special Strategic Partners,” including following up with the “Osaka Track” of the G20 Osaka Summit. In response, Minister Payne said that PM Morrison had evaluated the outcome of the Summit positively, particularly that Australia and Japan had shared focus on such issues like rule of law in the Indo Pacific, effectiveness of multilateral cooperation, and countering protectionism. Furthermore, Minister Payne mentioned that it had been powerful and effective to issue the G20 Leader’s statement on preventing exploitation of the Internet for Terrorism and Violent Extremism Conducive to Terrorism.

2. The two Ministers expressed their expectations for the successful implementation of “BUSHIDO GUARDIAN 19,” the Japan-Australia first-ever air-to-air joint exercise in Japan to be held this year, amidst the increasingly severe security environment in the region, noting that the exercise will further advance Japan-Australia security and defense cooperation.

3. The two Ministers also exchanged views regarding bilateral relations as well as the situations of the Pacific island region and Myanmar.