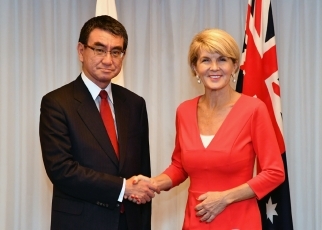 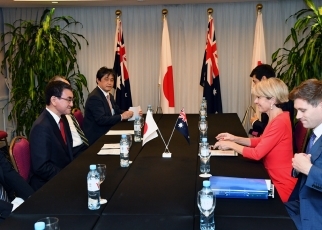 On May 21, commencing at 6:30 p.m. for approximately 20 minutes, Mr. Taro Kono, Minister for Foreign Affairs, who is visiting Buenos Aires to attend the G20 Foreign Ministers’ Meeting, held a foreign ministers’ meeting with the Hon Julie Bishop, MP, Minister for Foreign Affairs of the Commonwealth of Australia, who is staying in Buenos Aires. The overview of the meeting is as follows.

1. In opening remarks, Minister Kono expressed gratitude for Australia’s cooperation toward the success of the 8th Pacific Islands Leaders Meeting (PALM8), which was held in Iwaki City, Fukushima Prefecture on May 18 and 19. Both ministers confirmed that Japan and Australia and like-minded countries will work in close cooperation in order to realize an Indo-Pacific with a free, open and sustainable maritime order that is based on the rule of law.

2. Furthermore, the two foreign ministers exchanged views on the current state and future of the bilateral relationship, various challenges in the regional and international communities, including the North Korea situation and the situation in the South China Sea, and economic issues, including the Trans-Pacific Partnership (TPP).