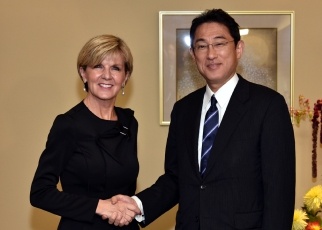 On September 30, commencing at 12.00 p.m. for a little over one hour, Mr. Fumio Kishida, Minister for Foreign Affairs of Japan, who was currently visiting New York to attend the United Nations General Assembly, held a Japan-Australia Foreign Ministers’ Meeting with the Hon. Julie Bishop, MP, Minister for Foreign Affairs of Australia. The overview of the meeting is as follows. (From the Japanese side, Mr. Kenji Hiramatsu, Deputy Vice-Minister for Foreign Policy and Director-General of the Foreign Policy Bureau; Mr. Junichi Ihara, Director-General of the Asian and Oceanian Affairs Bureau, and others attended the meeting. From the Australian side Mr. Peter Varghese, Secretary of the Department of Foreign Affairs and Trade, and others attended the meeting.)

This is the ninth meeting between Minister Kishida and Minister Bishop. (The previous meeting was on the occasion of the Seventh Pacific Islands Leaders Meeting (PALM7) in May of this year.)

1.
(1) After congratulating Minister Bishop on her reappointment as Deputy Leader of the Liberal Party and Minister for Foreign Affairs, Minister Kishida expressed his hope to work with Minister Bishop to further strengthen the special relationship between Japan and Australia. Minister Kishida also extended his gratitude towards Australia’s unambiguous appreciation of the progress of Japan as a peace-loving nation following the statement by Prime Minister Shinzo Abe on the 70th anniversary of the end of World War II, and its announcement supporting the strengthening of Japan’s role in the region and the international community swiftly after the enactment of the Legislation for Peace and Security.

(2) In response, Minister Bishop stated that it is important to meet often like this in order to further strengthen the powerful relationship between Japan and Australia.

2.
(1) In regard to bilateral relations, Minister Kishida expressed his hope to continue the strategic cooperation between Japan and Australia, and referred to the telephone talk between Prime Minister Shinzo Abe and Prime Minister Malcolm Turnbull on September 18.

(2) Minister Bishop stated that the telephone talk between the two leaders had been very meaningful, and that the change of prime ministers in Australia is a matter of domestic politics and will have no effect on the Japan-Australia relationship.

3. Both ministers confirmed the importance of cooperation between Japan and Australia and the United States, and both ministers shared the view that those countries share common fundamental values and strategic interests, and play a major role in security in the region.

4. In regard to the issue of disarmament and non-proliferation, Minister Kishida expressed his intention to continue to cooperate towards “a world free of nuclear weapons,” and to utilize the Nonproliferation and Disarmament Initiative (NPDI) led by Japan and Australia, and the two ministers confirmed that Japan and Australia will continue to cooperate in this regard.

5.
(1) In regard to the issue of North Korea, the two ministers concurred that it is important to strongly urge North Korea to refrain from provocative acts, comply with the relevant UN Security Council Resolutions and other commitments, and take substantive measures towards denuclearization. Minister Kishida also expressed gratitude over the understanding and cooperation of Australia on the abduction issue.

(2) In regard to the issue of the Republic of Korea, Minister Kishida mentioned the Japan-ROK Foreign Ministers’ Meeting held in the morning of September 30, and explained the current circumstances of the Japan-ROK relationship.