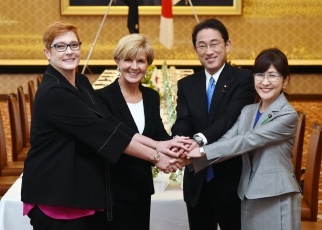 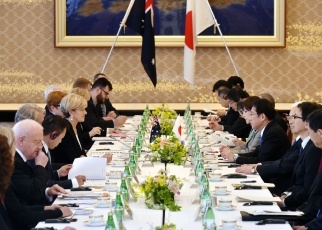 was issued after the talks).

Japan and Australia are “Special strategic partners” that share fundamental values and strategic interests. Under the fundamental idea of working together to maintain and strengthen a free and open rules-based regional and international order including the promotion of “Free and Open Indo-Pacific Strategy”, the two countries have confirmed to further enhance Japan-Australia security and defence cooperation, strengthening cooperation in addressing various issues which the region faces, and to further deepen our partnership.

(1)  The Ministers have confirmed to further strengthen the cooperation between two countries’ defence authorities including in the areas of training, capacity building and defence equipment and technology.

(2)  Furthermore, with respect to the legal framework of Japan-Australia security cooperation, the Ministers welcomed the progress of respective domestic procedures for the new Japan-Australia Acquisition and Cross Servicing Agreement (ACSA) and affirmed the importance of accelerating the negotiations of an agreement to reciprocally improve administrative, policy and legal procedures to facilitate joint operation and exercises between two countries under the recognition that it is an important mean to further promote bilateral security and defence cooperation.

(3)  Sharing the recognition of the important role of the United States in ensuring the peace, stability and prosperity of the region, the Ministers confirmed to further enhance trilateral cooperation between Japan, Australia, and the United States.  Moreover, two countries confirmed to strengthen trilateral coordination between Japan, Australia and India.

(1)  The Japanese side stated that North Korea poses a new level of threat and it supports the US position of placing “all options are on the table”.  The Ministers held a frank exchange of views on means to halt provocative actions by North Korea and to make it comply with the international obligations and commitments, including those under United Nations Security Council Resolutions.  They affirmed the importance of China’s role in dealing with the North Korean issue.  Japan expressed its continued hope for Australian understanding and support on the abduction issue which is the issue of highest priority for the Abe administration.

(2)  Both sides discussed maritime security, including the situations in the South China Sea and the East China Sea.  On the South China Sea, they strongly urged to pursue the demilitarization of disputed features and called on all parties to seek to settle disputes by peaceful means in accordance with international law. With regard to the East China Sea, they reiterated their opposition to unilateral or coercive actions that could alter the status quo and increase tensions and reaffirmed that they will remain in close contact on the matter.

(3)  The Ministers also exchanged views on regional frameworks such as EAS and ASEAN as well as the situation in the Pacific region, bearing in mind the 8th Pacific Islands Leaders Meeting (PALM8) which is scheduled in May 2018, and affirmed to coordinate on the matter.