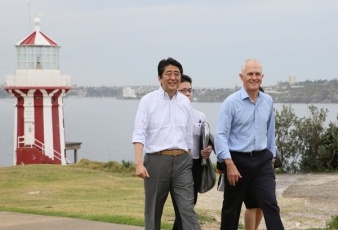 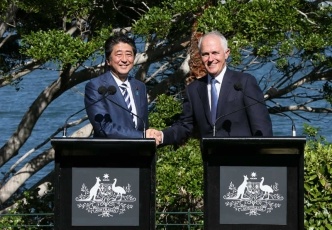 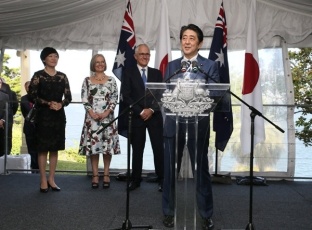 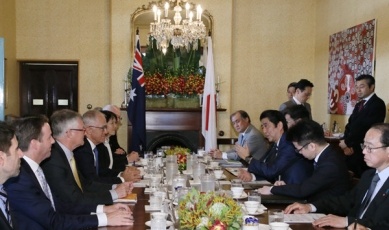 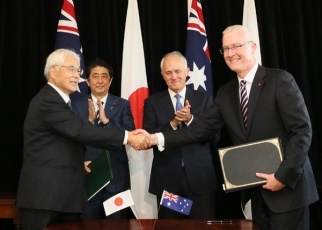 Photo: Cabinet Public Relations Office
On Saturday, January 14, commencing at 2:30 p.m. (12:30 p.m. JST) for approximately one hour and 30 minutes, Prime Minister Abe held a Summit Meeting with Prime Minister Turnbull. After the meeting, Mr. Sumio Kusaka, Japan's Ambassador to Australia, and Mr. Bruce Miller, Australia's Ambassador to Japan, signed the "Agreement between the Government of Japan and the Government of Australia concerning Reciprocal Provision of Supplies and Services between the Self-Defense Forces of Japan (JSDF) and the Australian Defence Force (ADF) (Japan-Australia Acquisition and Cross-servicing Agreement [Japan-Australia ACSA]) (PDF)

3 Reception Hosted by Prime Minister Turnbull and His Spouse

(1) At the outset, Prime Minister Turnbull mentioned the history of the Agreement on Commerce between Japan and the Commonwealth of Australia arriving at its 60th anniversary, the Japan-Australia EPA in place for two years, and the Japan-Australia Joint Declaration on Security Cooperation announced by Prime Minister Abe and former Prime Minister Howard 10 years ago, indicated that Australia welcomes investments from Japan, and noted the commitment of the two countries to free trade, including the TPP and RCEP, and to ACSA signed today, highlighting the deepening relationship between the two countries.

(3) Prime Minister Abe also mentioned the effect of the Japan-Australia EPA that took effect two years ago and described his resolve to ensuring "hospitality" that endears visitors from around the world, including Australia, to Tokyo and Japan in the 2020 Tokyo Olympic and Paralympic Games.

(4) The reception took place in a very warm atmosphere, with attendees breaking into applause and laughter many times at the witty remarks from the two Prime Ministers. 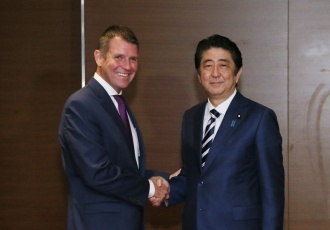 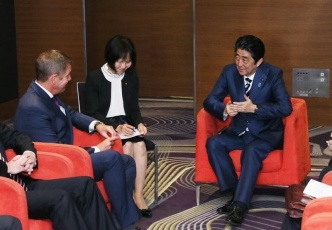 (1) At the outset, Prime Minister Abe commented that Japan wishes to cooperate toward the further strengthening of the favorable relationship between Japan and Australia. He stated that Japanese companies in a variety of sectors have businesses in NSW and that he hoped this business mission contributes to even closer ties.

(2) In response, Premier Baird welcomed Prime Minister Abe on his visits to Sydney and NSW and explained that he would actively assist Japanese companies with businesses in NSW, further stimulate cultural and social interactions, including sister city ties and Japanese language education, and utilize these efforts to foster a future-oriented relationship. 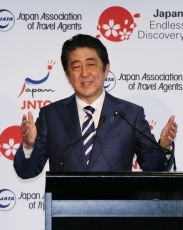 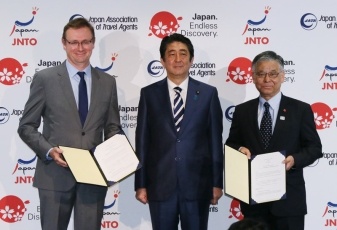 Photo: Cabinet Public Relations Office
(a) On Saturday, January 14, commencing at 11:30 a.m., the Japan-Australia Tourism Seminar took place at a hotel, hosted by the Japan National Tourist Organization [JNTO], co-hosted by the Japan Association of Travel Agents [JATA], and assistance by the Ministry of Land, Infrastructure, Transport and Tourism's Japan Tourism Agency. Approximately 150 people attended the event, including government officials from both countries, Japanese and Australian tourism-related companies, and media representatives. Mr. Hamilton-Smith, a minister from South Australia, and other officials attended from Australia.

(b) Prime Minister Abe delivered opening remarks at the seminar. He mentioned that Australia has continued to stand by and offer encouragement to Tohoku since the immediate aftermath of the Great East Japan Earthquake in 2011, and expressed hope for even closer ties between Japan and Australia. He noted that the number of foreign visitors to Japan has exceeded 20 million, and introduced Japan's appeals, such as the rich nature and hot springs throughout the country, Japanese foods that harness local ingredients, and interactions with friendly people.

(c) The JNTO and Australia's Tourism Agency (TA) exchanged a memorandum of cooperation at the seminar. 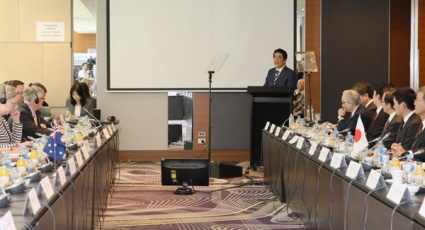 Photo: Cabinet Public Relations Office
(a) On Saturday, January 14, commencing at 11:40 a.m., the Japanese Government hosted (and co-hosted by the Japan External Trade Organization [JETRO]) a business forum at a hotel in Sydney with cooperation from the Australian Department of Foreign Affairs and Trade and Australian Trade and Investment Commission. Government officials and private-sector companies from both countries jointly participated in this forum. From the Australian side, NSW Premier Baird, Minister for Trade, Tourism and Investment Ciobo, and other dignitaries attended the forum.

(b) Prime Minister Abe delivered opening remarks at the forum and looked forward to the two countries leading the world in developing innovation areas. He also commented on opening up further opportunities and possibilities for business development from a broad perspective and the prospect of further enhancement of the "Special Strategic Partnership" between Japan and Australia.

(c) From the Japanese side, nine companies accompanying Prime Minister Abe gave presentations about energy cooperation and innovation cooperation between Japan and Australia and the businesses Japanese companies were conducting in Australia. They engaged in vibrant exchanges of views across sectors with participating companies.