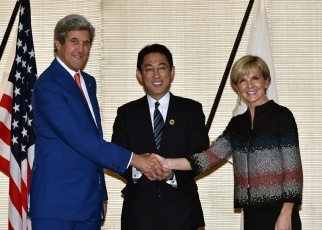 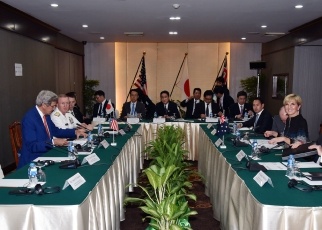 On July 25, commencing at 7:50 p.m. (local time) for approximately 50 minutes, Mr. Fumio Kishida, Minister for Foreign Affairs, held the Japan-United States-Australia Trilateral Strategic Dialogue (TSD) with Mr. John F. Kerry, Secretary of State of the United States of America, and Ms. Julie Bishop, Minister for Foreign Affairs of Australia, in Laos. The overview of the meeting is as follows. A joint statement was also issued.

Minister Kishida, who chaired the meeting, expressed his happiness for being able to hold the TSD for the first time in approximately three years, noted that the severity of the security environment in the Asia-Pacific region has intensified over that three-year period, and explained that he hopes to make the solidarity between Japan, the United States and Australia stronger than ever before. The ministers held an in-depth discussion on the South China Sea, the East China Sea, North Korea and counter-terrorism, and concurred that the three countries will cooperate and coordinate closely, including with regard to these issues.

The ministers shared serious concerns regarding maritime disputes in the South China Sea. They concurred on the exercising of self-restraint from unilateral actions, and the importance of setting disputes by peaceful means in accordance with the principles of international law, including the United Nations Convention on the Law of the Sea (UNCLOS), and the respect for legal and diplomatic processes, including the Philippines-China arbitration.

Minister Kishida explained the situation in the East China Sea. The ministers opposed any coercive or unilateral actions that could alter the status quo and increase tensions, and concurred to remain in close communication.

The ministers concurred that they will strongly urge North Korea, which is repeatedly taking provocative actions, to exercise self-restraint and comply with relevant UN Security Council resolutions. Also, Japan's efforts to resolve the abductions issue garnered renewed understanding and support from the United States and Australia.

The ministers shared concerns about the expansion of the threat of terrorism to the Asia in region, and concurred to coordinate on counter-terrorism as well. Minister Kishida stated that it is important to utilize each country's strengths, and make efforts in a mutually complementary way and in a way that generates synergistic effects.