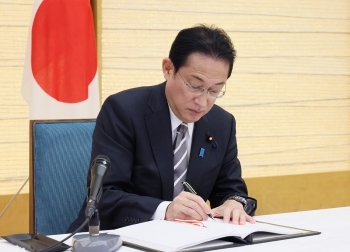 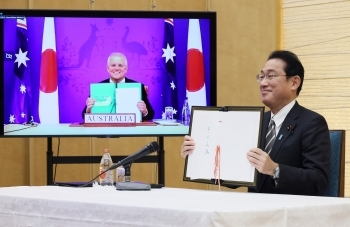 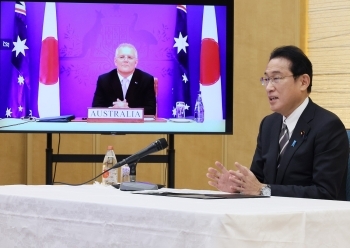 Prime Minister Kishida and Prime Minister Morrison signed the Japan-Australia Reciprocal Access Agreement (RAA). At the Signing Ceremony, the two leaders welcomed the signing of the Agreement which will elevate bilateral security and defence cooperation to a new level, and expressed their expectation for the further development of Japan-Australia relationship.

The two leaders shared the view that Japan and Australia, as “Special Strategic Partners” will further strengthen bilateral relationship and embody their commitment toward the realization of a “Free and Open Indo-Pacific.”

The two leaders welcomed the signing of the Japan-Australia Reciprocal Access Agreement. Prime Minister Kishida affirmed that the Agreement is the first Reciprocal Access Agreement for Japan and an epoch-making achievement. Prime Minister Kishida showed his recognition that security and defence cooperation between Japan and Australia continue to be a model case for Japan to strengthen security and defence cooperation with other countries. In response to this, Prime Minister Morrison stated that Japan is the closest and the only “Special Strategic Partner,” in Asia and the Japan-Australia Reciprocal Access Agreement (RAA) reflects the strong bond between two countries. The Agreement is an epoch-making achievement, which leads to a new chapter for strengthening security and defence cooperation between Japanese Self-Defense Force and Australian Defence Force.

The two leaders shared the recognition that it is necessary to further deepen the coordination between Japanese Self-Defense Force and Australian Defence Force, to expand cooperation to new areas such as space and cyber, and to strengthen the effort in the area of economic security, including cooperation concerning the critical technology and resilient supply chains.

In addition, the two leaders pledged to issue at the earliest opportunity a new Japan-Australia Joint Declaration on Security Cooperation to serve as a compass for the two countries’ engagement for years to come, deepening and broadening the scope of bilateral security and defence cooperation.

Furthermore, Prime Minister Kishida reiterated Japan’s support for the Australia-UK-US security partnership, AUKUS, the development of which will contribute to regional peace and stability.

The two leaders also exchanged views on the situation of North Korea and condemn the launch of ballistic missile on January 5 as a violation of United Nations Security Council resolutions. They shared the view that nuclear and missile-related activities by North Korea threaten the peace and stability of Japan, the region and international community. The two leaders confirmed that they would continue to closely work together on the response to North Korea, including abductions issue.

The two leaders shared the view that they strongly oppose to unilateral attempt to change the status quo by force in East and South China Seas.

The two leaders affirmed the importance of mid to long term U.S. engagement to the region toward the realization of a “Free and Open Indo-Pacific”, and comitted to working together with allies and like-minded countries including cooperation between Japan, Australia, India and the U.S., as well as between Japan, Australia and the U.S. They also affirmed the significance of coordination with partners including Southeast Asia countries, Pacific islands countries and European countries.

Prime Minister Kishida expressed his determination to lead international effort in the area of Nuclear Disarmament, and the two leaders concurred on closely cooperating in the field of Disarmament and non-proliferation including efforts through Non-proliferation and Disarmament Initiative(NPDI).

The two leaders affirmed to advance Japan-Australia economic relationship with public and private sectors acting in unison such as in the development of new urban areas of Western Sydney. Furthermore, the two leaders affirmed to deepen cooperation toward global issues such as climate change. In this regard, they concurred on accerating energy transition in Asia and on promoting cooperation for decarbonisation such as by hydrogen project.