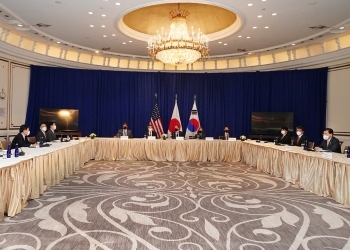 On September 22, commencing at 5:40 p.m. (local time, 6:40 a.m. on September 23 Japan time) for approximately 60 minutes, Mr. MOTEGI Toshimitsu, Minister for Foreign Affairs of Japan, visiting the United States (New York) to attend the United Nations General Assembly, held a Japan-U.S.-Republic of Korea (ROK) Foreign Ministers’ Meeting with the Honorable Antony BLINKEN, Secretary of State of the United States, and His Excellency Mr. CHUNG Eui-yong, Minister of Foreign Affairs of the Republic of Korea. The overview of the meeting is as follows.

The three Ministers also exchanged views on regional situations including the situation in Myanmar and China’s recent actions, and efforts to realize a Free and Open Indo-Pacific. In addition, they discussed global issues such as climate change, and concurred that Japan, the United States and the ROK will further deepen their collaboration and cooperation.