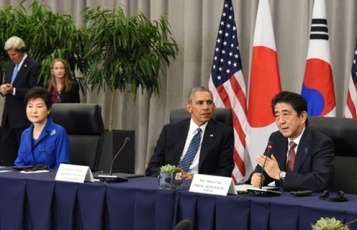 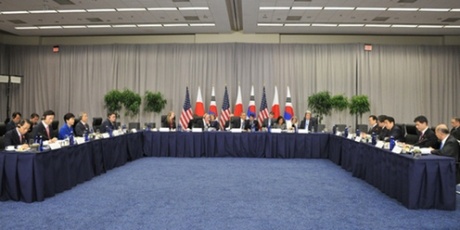 On March 31, commencing at 10:50 a.m. (local time) for approximately one hour, Mr. Shinzo Abe, Prime Minster of Japan, who is visiting Washington D.C. to attend the Nuclear Security Summit, had a trilateral summit meeting with Mr. Barack Obama, President of the United States of America, and Ms. Park Geun-hye, President of the Republic of Korea (ROK) at the Walter E. Washington Convention Center. The overview of the trilateral summit meeting is as follows. (The meeting was attended on the Japanese side by Mr. Koichi Hagiuda, Deputy Chief Cabinet Secretary, and others; on the US side by Mr. Joseph R. Biden, Vice President of the United States of America, and others; and on the ROK side by Mr. Yun Byung-se, Minister of Foreign Affairs of the ROK, and others.

The leaders of Japan, the United States, and the ROK, which bear responsibility for peace and stability in the region, met amid increasingly difficult security environment for the three countries. They confirmed the importance of the rule of law as well as rule-based actions, and conducted a meaningful exchange of opinions regarding various regional and global issues with a particular focus on North Korean issues.

The three leaders shared the view that the development of North Korea’s nuclear weapon and missile capabilities poses a direct and grave threat to peace not only in the region, but to the entire international community. The three leaders confirmed the need to move forward with cooperation in the security field among Japan, the United States, and the ROK in order to deal with this situation and their intentions to continue to strengthen close cooperation among them in all areas. They agreed to instruct officials at their respective foreign affairs and defense agencies to make progress with specific security and defense cooperation initiatives.

Additionally, the three leaders expressed a favorable view of the resolute stance by the international community shown in the adoption of Security Council Resolution 2270, which has strong content, coupled with each countries’ own particular measures, and reconfirmed the importance of a steady implementation of Security Council resolutions related to North Korea.

Furthermore, Prime Minister Abe explained Japan’s position regarding the abductions issue and obtained understanding of and support for Japan’s efforts once more from President Obama and President Park.

The meeting also included opinion exchanges on global issues, such as measures of counter-terrorism, the situation in the Middle East, climate change, and Vice President Biden’s initiative to eradicate cancer. The three leaders agreed on the importance of deepening collaboration and cooperation among Japan, the United States, and the ROK in a wide range of areas and confirmed their intention to continue close collaboration and cooperation in light of their shared strategic interests in the region.