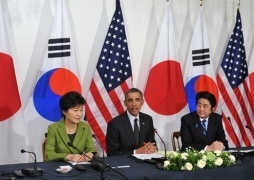 On 25 March 2014, for approximately 45 minutes from 18:35 (local time), Prime Minister Shinzo Abe held the Japan-U.S.-ROK Trilateral Summit Meeting with President Barack Obama of the United States of America and President Park Geun-He of the Republic of Korea at the U.S. Ambassador’s Residence in The Hague. Prime Minister Abe was on a visit to The Hague to attend the Nuclear Security Summit. The outline of the meeting is as below.
(Attendees include Mr. Katsunobu Kato, Deputy Chief Cabinet Secretary of Japan, Ms. Susan Rice, National Security Advisor to the President of the U.S., and Mr. Yun Byung-se, Minister of Foreign Affairs of the ROK)

On the security of East Asia, centering on the issues of North Korea, the importance of closer collaboration among Japan, the U.S. and the ROK was confirmed, and a meaningful discussion was held.
Both Prime Minister Abe and President Park appreciated President Obama’s initiative to hold the meeting.

The three leaders exchanged their views on the situation in North Korea. Prime Minister Abe pointed out that North Korea continues its nuclear and missile development and therefore they need to urge North Korea to change its policy. The three leaders concurred on the importance of closer coordination among the three countries and of China playing an appropriate role for the realization of North Korea’s denuclearization.
Prime Minister Abe explained the current status of Japan-North Korea relations, including the planned resumption of Governmental-level Consultations with North Korea, and expressed his intention to closely coordinate with the U.S. and the ROK in the way forward. Also, he expressed his gratitude to the U.S. and the ROK for their consistent understanding and cooperation on the abductions issue, one of the most important issues for Japan. He stated his intention to coordinate with the two counties on this matter, and gained the other two leaders’ understanding.

The three leaders shared their common recognition that it is becoming increasingly important for the three countries to further deepen their cooperation on a wide-range of areas, given the changing strategic environment of the Asia and Pacific region.
Prime Minister Abe stated that there are many areas where the three countries can deepen their cooperation, and expressed his intention to further expand cooperation.
Furthermore, the three leaders shared their recognition that the Japan-U.S. Alliance and the U.S.-ROK alliance greatly contribute to the peace and stability of the East Asia region.