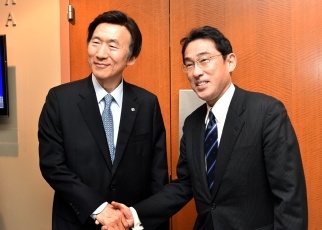 On September 30, commencing at 10 a.m. (local time) for approximately 50 minutes, Mr. Fumio Kishida, Minister for Foreign Affairs, who was visiting New York to attend the United Nations General Assembly, held a Japan-Republic of Korea (ROK) Foreign Ministers’ Meeting with Mr. Yun Byung-se, Minister of Foreign Affairs of the ROK. The overview of the meeting is as follows. (From the Japanese side, Mr. Junichi Ihara, Director-General, Asian and Oceanian Affairs Bureau, and others attended the meeting; From the ROK side, Mr. Lee Sang-deok, Director-General, Northeast Asian Affairs Bureau, and others attended the meeting.)

1. This was the eighth Japan-ROK foreign ministers’ meeting since the inauguration of Minister Kishida. Following the meeting in Malaysia in August, the two Foreign Ministers exchanged opinions aimed at advancing Japan-ROK relations, in a frank and constructive manner.

2.
(1) At the beginning, Minister Kishida appreciated how both sides have been able to hold regular foreign ministers’ meetings on the occasion of international conferences, and told that he was pleased with the successful hosting of Nikkan Koryu Omatsuri (Japan-Korea Festival) at both capital cities. Minister Kishida also stated that the attendance of Minister Yun at official festival event in Seoul and he himself (Minister Kishida) realized the strength of the bond between Japan and the ROK when he attended the opening ceremony of the festival in Tokyo. In addition, Minister Kishida stressed the importance of continued cooperation between the two nations, so as to make the remaining three months of this year significant, which marks the 50th anniversary of the normalization of relations between Japan and Korea.

(2) Minister Yun referred to the Nikkan Koryu Omatsuri (Japan-Korea Festival) while also commenting that this is the fourth foreign ministers’ meeting held between Japan and the ROK since the start of this year, expressing his delight towards having close communication with Minister Kishida.

3.
(1) In regard to Japan-ROK relations, the two Ministers reaffirmed their intention to continue working together to advance relations through ongoing dialogue at various levels and in a wide range of fields. In particular, Minister Kishida also commented that enhancing cooperation in the security field, including the United States, is a pressing issue, and in that context he explained the significance of Japan’s “Legislation for Peace and Security” and Japan’s position of making further contributions to the peace and stability of the region and the international society.

(2) In regard to the Japan -China-ROK Summit, Minister Yun outlined the efforts being done by the ROK as host nation. In response, Minister Kishida applauded the efforts of the ROK in preparing to host the Japan-China-ROK Summit and expressed his anticipation for the leadership of Minister Yun as the Chairman of the Summit. The two Ministers reaffirmed their intention for Japan and the ROK to continue working closely together towards ensuring the success of the Summit.

4. In regard to outstanding issues of concern between Japan and the ROK, Minister Kishida raised the trial over the “requisitioned civilians” from the Korean peninsula, the tightening of regulations on Japanese marine product imports, the issue surrounding the indictment of the Sankei Shimbun’s former Seoul bureau chief, and the Takeshima dispute, among others. Minister Yun cited the comfort women issue, among others.