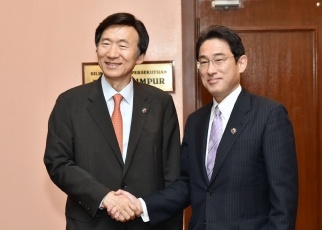 On August 6, commencing at 1:25 p.m. (local time) for approximately 20 minutes, Mr. Fumio Kishida, Minister for Foreign Affairs, who was visiting Malaysia to attend the ASEAN-related Foreign Ministers' Meetings, held a Japan-Republic of Korea (ROK) Foreign Ministers' Meeting with Mr. Yun Byung-se, Minister of Foreign Affairs of the ROK. The overview is as follows. (From the Japanese side, Mr. Junichi Ihara, Director-General, Asian and Oceanian Affairs Bureau, and Mr. Kenji Hiramatsu, Deputy Vice-Minister for Foreign Policy, and others attended the meeting. From the ROK side, Mr. Lee Sang-deok, Director-General, Northeast Asian Affairs Bureau, and others attended the meeting.)

1 This was the two ministers' first meeting in around one and a half months since the Japan-ROK Foreign Ministers' meeting held in Tokyo in June. Both Foreign Ministers confirmed that they will continue to make steady efforts in order to progress Japan-ROK relations, regardless of difficult issues between both countries.

2 (1) At the beginning, Minister Kishida noted the significance of Minister Yun's visit to Japan in June and explained the harsh opinions within Japan on the subsequent issue of the registration of ''Sites of Japan's Meiji Industrial Revolution'' as World Heritage sites. Minister Kishida also stressed the importance of fostering an atmosphere toward improving Japan-ROK relations and the significance of this year, which is the 50th anniversary of the normalization of relations between Japan and the ROK.

(2) Minister Yun replied that he would like to take advantage of the positive atmosphere toward improving Japan-ROK relations and to work to realize a virtuous cycle in the direction of improving their two countries' relations.

3 The meeting's duration was short, and it was not intended to discuss individual matters between Japan and the ROK, but Minister Yun expressed his interest in the statement on the 70th anniversary of the end of World War II, from the perspective of advancing Japan-ROK relations. In response, Minister Kishida explained that the Abe Cabinet upholds the position on the recognition of history outlined by the previous administrations in its entirety and would continue to do so in the future.

4 Both ministers reconfirmed that they would continue to cooperate toward the early holding of Japan-ROK-China Trilateral Summit Meeting during this year.