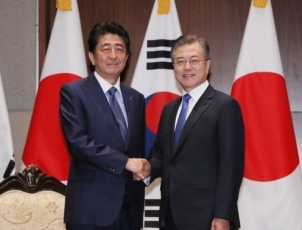 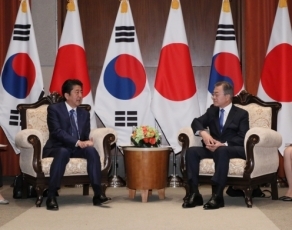 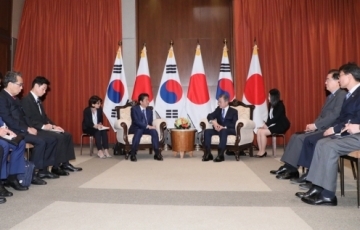 Japan-ROK Summit Meeting 3 Photo: Cabinet Public Relations Office
On September 25, commencing at around 11:20 a.m. (local time) for approximately 50 minutes, Mr. Shinzo Abe, Prime Minister of Japan, held a Japan-Republic of Korea (ROK) Summit Meeting with Mr. Moon Jae-in, President of the ROK, during his visit to New York to attend the United Nations General Assembly (UNGA). The overview of the meeting is as follows.

President Moon explained that he faithfully conveyed Prime Minister Abe's message to Chairman Kim Jong-un. President Moon expressed the view that a Japan-North Korea Summit Meeting will definitely be necessary in order to build peace on the Korean Peninsula, stated that he intends to provide proactive support and cooperation towards realizing that Summit, and explained that this year is the 20th anniversary of the Japan-ROK Joint Declaration, and he intends to elevate the future-oriented Japan-ROK relations to a higher level in this milestone year.

President Moon provided a detailed explanation of the outcomes of the recent Inter-Korean Summit, and in response, Prime Minister Abe stated that Japan will spare no effort in cooperating with the ROK so that President Moon's efforts will lead to concrete outcomes towards the denuclearization of the Korean Peninsula. Prime Minister Abe expressed the view that the full implementation of all relevant UNSC resolutions is important in this regard and explained that Japan intends to continue to coordinate with the ROK. In addition, President Moon explained that he once again raised the abductions issue to Chairman Kim, and Prime Minister Abe responded by expressing his gratitude and requesting continued cooperation. Prime Minister Abe stated that he is prepared to depart frommutual distrust and meet face to face with Chairman Kim.

Prime Minister Abe expressed the view that he intends to continue to maintain Japan-ROK-U.S. coordination in order to urge North Korea to take concrete actions, and explained that he hopes to cooperate with President Moon to manage the difficult issues between Japan and the ROK. The two leaders agreed on the importance of coordination on the issue of North Korea, and cooperation to build  future-oriented Japan-ROK relation.