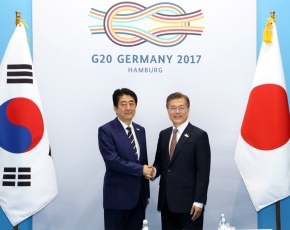 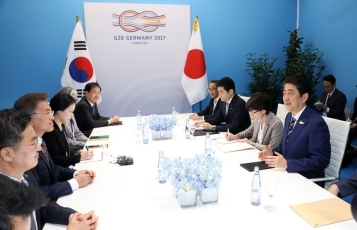 On July 7, commencing at 9:40 a.m. (local time) for approximately 35 minutes, Mr. Shinzo Abe, Prime Minister of Japan, who was visiting Hamburg, the Federal Republic of Germany, to attend the G20 Summit, held a Japan-Republic of Korea (ROK) Summit Meeting with Mr. Moon Jae-in, President of the ROK. The overview of the meeting is as follows. (The meeting was attended on the Japanese side by Mr. Kotaro Nogami, Deputy Chief Cabinet Secretary, Mr. Eiichi Hasegawa, Special Advisor to the Prime Minister, Mr. Shotaro Yachi, Secretary-General of the National Security Secretariat, and others, and on the ROK side by Mr. Kim Dong-yeon, Deputy Prime Minister for Economic Affairs and Minister of Finance, Dr. Kang Kyung-wha, Minister of Foreign Affairs, and others.)