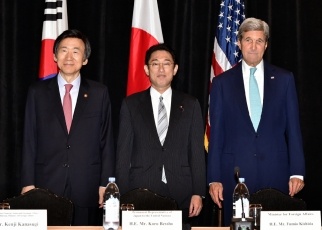 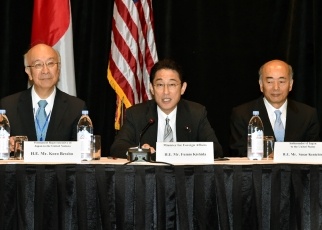 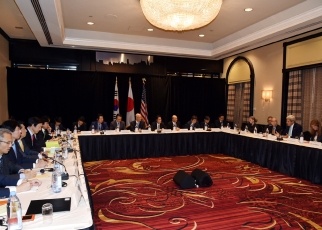 On September 18, commencing at 1:45 p.m. (New York time) for approximately one hour, Mr. Fumio Kishida, Minister for Foreign Affairs, held and chaired a Japan-U.S.-Republic of Korea (ROK) Trilateral Foreign Ministers' Meeting with the Honorable John Kerry, Secretary of State of the United States of America, and H.E. Mr. Yun Byung-se, Minister of Foreign Affairs of the ROK, on the margins of the United Nations General Assembly (UNGA). The overview of the meeting is as follows.

After the meeting, a Japan-U.S.-ROK Foreign Ministers' Joint Statement summarizing the outcomes of the meeting was released.

At the beginning, Minister Kishida stated the following: North Korea's provocations, including the recent nuclear test and its progress with nuclear and missile development constituted a threat of a new dimension; as the international community needs to respond in an unprecedented manner, it is significant for the foreign ministers of Japan, the United States and the ROK to gather for the first time in approximately one year since last year's UNGA; I hope that Japan, the United States and the ROK will play a central role in efforts by the international community and coordinate closely to strengthen pressure on North Korea through the UN Security Council (UNSC) resolution with additional sanctions as well as measures of each country.

The three Ministers shared the view that they will work closely together to exert pressure on North Korea, including at the UN, bearing in mind that North Korea's flagrant disregard of the relevant UNSC resolutions requires even stronger international pressure. Furthermore, the Ministers discussed the important work currently taking place at the UNSC in order to further sanction North Korea, and also considered possible measures of their own, such as ways to further restrict revenue sources for North Korea's nuclear and missile programs.
Secretary of State Kerry reiterated that the United States remains steadfast in its defense commitments to the ROK and Japan, including the commitment to provide extended deterrence, backed by the full range of its nuclear and conventional defense capabilities.

Minister Kishida mentioned that the issue of abductions by North Korea is the most important issue concerning the sovereignty of Japan and the lives and safety of the Japanese citizens, and Prime Minister Abe himself has strong determination to resolve the issue immediately. Minister Kishida called for the continued understanding and cooperation of both the United States and the ROK, and he gained support from Secretary Kerry and Minister Yun.

Minister Kishida expressed the view that amid the increasing severity of the security environment in Asia, the Japan-U.S. Alliance, the U.S.-ROK Alliance and furthermore the future-oriented relationship between Japan and the ROK have an even greater role to play in regional peace and stability and the three Ministers shared the view that trilateral cooperation on regional and global challenges will continue.