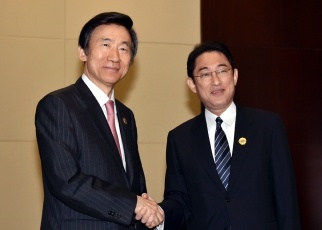 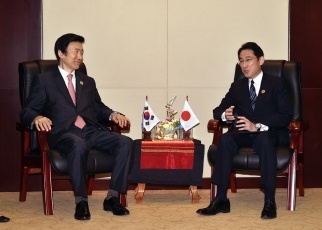 On July 25, commencing at around 9:15 a.m. (local time) for approximately 40 minutes, Mr. Fumio Kishida, Minister for Foreign Affairs of Japan, during his visit to the Lao People's Democratic Republic (PDR) to attend ASEAN related Foreign Ministers' Meetings, held a Japan-Republic of Korea (ROK) Foreign Ministers' Meeting with Mr. Yun Byung-se, Minister of Foreign Affairs of the ROK. The overview of the meeting is as follows. (From the Japanese side  Mr. Kenji Kanasugi, Director-General of the Asian and Oceanian Affairs Bureau and others and  from the ROK side  Mr. Chung Byung-won, Director-General of the Northeast Asian Affairs Bureau of the Ministry of Foreign Affairs and others attended the meeting).

1 With regard to Japan-ROK relations, Minister Yun explained the status of preparations for establishing the foundation based on the agreement on the issue of comfort women reached at the end of last year, and the two foreign ministers shared the view that both Japan and the ROK will implement the agreement faithfully. In addition, Minister Kishida noted the importance of promoting proactive cooperation of Japan and the ROK, and succinctly raised various difficult issues.

2 With regard to North Korea's nuclear and missile issues, Minister Kishida emphasized the importance of coordination between Japan and the ROK, and among Japan, the ROK, and the United States, along with explaining that he hopes Japan and the ROK will also cooperate toward the resolution of resolving North Korea's humanitarian issues, including the abductions issue. The two foreign ministers shared the view that they will continue to cooperate closely on the North Korea issues. Minister Kishida stated that Japan supports the decision to deploy the THAAD (Terminal High-Altitude Area Defense) system.

3 In addition, the two foreign ministers confirmed that they would continue cooperation toward the peaceful resolution of disputes in the South China Sea, and that they would closely cooperate at the series of ASEAN-related meetings in the Lao PDR.