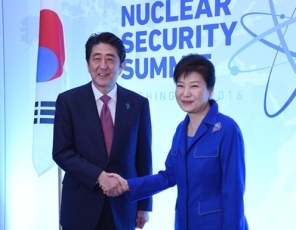 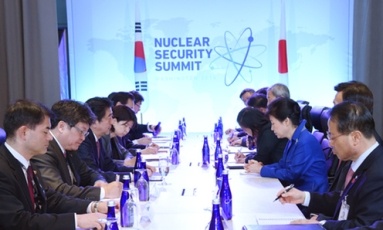 Photo: Cabinet Public Relations Office
On March 31, commencing at around 12:45 p.m. (local time) for approximately 20 minutes, Mr. Shinzo Abe, Prime Minster of Japan, who was visiting Washington D.C. to attend the Nuclear Security Summit, held a meeting with Ms. Park Geun-hye, President of the Republic of Korea (ROK). The overview is as follows. (The meeting was attended on the Japanese side by Mr. Koichi Hagiuda, Deputy Chief Cabinet Secretary, and others; and on the ROK side by Mr. Yun Byung-se, Minister of Foreign Affairs of the ROK, and others.)

1 At the opening of the meeting, Prime Minister Abe highly appreciated the close cooperation between the Governments of Japan and the ROK against repeated provocative actions by North Korea and expressed his desire to seize this opportunity to further deepen security cooperation between Japan-ROK, and Japan-US-ROK in a variety of ways. In addition, Prime Minister Abe explained that Japan intends to continue cooperation aimed at reaching a solution to North Korea's human rights and humanitarian problems, including the abductions issue. In response, President Park noted that similar problems exist in the ROK and would like to cooperate on this issue. The two leaders confirmed a resolute stance toward North Korea and shared the view that they continue close collaboration.

2 In addition, Prime Minister Abe once again welcomed the agreement regarding the comfort women issue at the end of last year, and the two leaders concurred on steadily implementing the agreement.