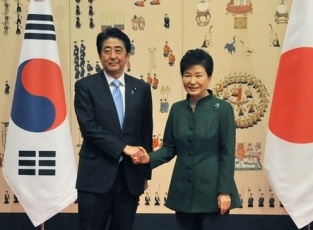 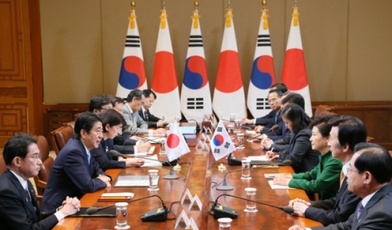 (2) The two leaders held a candid discussion on various issues between Japan and the ROK. Prime Minister Abe explained Japan's position on these issues and requested the ROK to address them.

(3) Based on the recognition that the comfort women issue is having an impact on the development of Japan-ROK relations, the two leaders shared recognition of the importance of two countries building a future-oriented relationship so as not to allow the future generations to be impaired by the issue. Regarding this issue, Director General and other level consultations are already taking place under tenacious manner.  The both leaders concurred on instructing that they continue and accelerate the consultations in order to conclude them as promptly as possible, bearing in mind the fact that this year is the milestone year of the 50th anniversary of the normalization of Japan-ROK relations.

(1) The two leaders appreciated the fact that bilateral relationship is gradually deepening as a result of efforts to pursue communication between Japan and the ROK, and also shared views to strengthen cooperation between Japan and the ROK in various fields including security, people-to-people exchanges, and the economy. In addition, Prime Minister Abe brought up the current situation in the South China Sea.

(2) In-depth discussion took place regarding the North Korea issue, and the two leaders confirmed that Japan-ROK, and Japan-US-ROK, will both cooperate closely in the field of security in order to extract North Korea's action towards the denuclearization. Furthermore, they also shared views to cooperate on humanitarian issues, including the abductions issue.

(3) The two leaders also discussed various issues about economy, such as the deepening of the bilateral economic relations, the importance of the Japan-China-ROK Free Trade Agreement (FTA) and the Regional Comprehensive Economic Partnership (RCEP), and the significance of the Trans-Pacific Partnership (TPP).