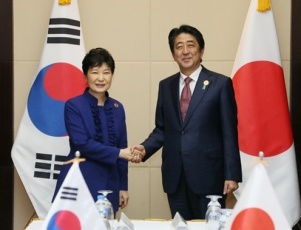 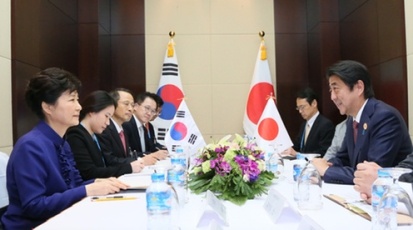 On September 7, commencing at around 5:25 p.m. (local time) for over 30 minutes, Mr. Shinzo Abe, Prime Minister of Japan, who was visiting the Lao People’s Democratic Republic to attend the Association of Southeast Asian Nations (ASEAN)-related Summit Meetings, held a Japan-Republic of Korea (ROK) Summit Meeting with Ms. Park Geun-hye, President of the ROK. The overview is as follows. (The meeting was attended on the Japanese side by Mr. Koichi Hagiuda, Deputy Chief Cabinet Secretary, and others; and on the ROK side by Mr. Yun Byung-se, Minister of Foreign Affairs of the ROK, and others.)

1. At the beginning, Prime Minister Abe stated that he is very pleased that the relationship between Japan and the ROK is progressing positively following the agreement reached at the end of last year, and together with President Park he intends to advance future-oriented cooperation in order to build a new era of Japan-ROK relations. Furthermore, Prime Minister Abe stated that the ballistic missile launch by North Korea on September 5 was an unforgivable provocation and he hopes that Japan and the ROK will continue coordinating closely, including at the United Nations Security Council (UNSC).

2. With regard to the agreement regarding the issue of comfort women reached at the end of last year, Prime Minister Abe stated that it is important for the agreement to be widely supported by both countries as well as by the international community, explained that Japan has completed the expenditure of 1 billion yen based on the agreement, and strongly requested the ROK side to continue making efforts to steadily implement the agreement, including the issue of the statue built in front of the Embassy of Japan in Seoul. In response, President Park expressed the view that steady implementation of the Japan-ROK agreement is important, and the two leaders shared the view that they will continue faithfully implementing the agreement. Furthermore, Prime Minister Abe explained that he hopes to pursue wide-ranging and future-oriented cooperation in fields such as security, economy and people-to-people exchanges, while appropriately managing the outstanding issues of concern between Japan and the ROK. President Park said that she hopes to work together toward future-oriented ROK-Japan relations, including through youth exchanges and mutual cooperation on the Olympic Games.

4. With regard to the South China Sea issue, Prime Minister Abe expressed the view that peaceful resolution of disputes should be pursued based on international law, including the award by the Arbitral Tribunal between the Philippines and China. President Park stated that she hopes the arbitration award will serve as an opportunity for diplomatic efforts toward the resolution of the South China Sea issue.