Visit to China by Mrs. Akie Abe, the Spouse of the Prime Minister of Japan

From November 9 to November 12, 2014, Mrs. Akie Abe, the spouse of Prime Minister of Japan Mr. Shinzo Abe, accompanied her husband on a trip to the People's Republic of China, where he attended the APEC Economic Leaders' Meeting and she undertook a variety of exchange activities. 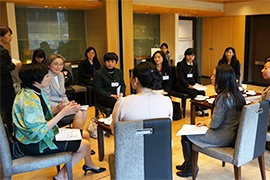 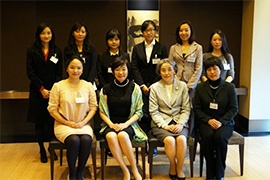 Mrs. Akie Abe met people who experienced JET (Japan Exchange and Teaching Programme) or JDS (Japan Human Resource Development Scholarship for Chinese Young Leaders) Programme, and discussed about the difference between Japan and China on "Women's active participation in the society". She enjoyed listening to the participants on various topics such as their impression and unforgettable experience during their stay in Japan.

(2) Dinner with women in Beijing 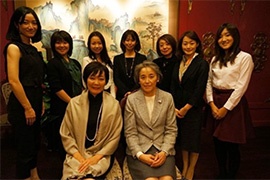 Mrs. Akie Abe had a dinner with seven women in Beijing. Five women who play active roles in culture, literature, entertainment or business field respectively, as well as two Japanese university students who vigorously try to promote Japan-China exchange gathered at the event. Each participant enjoyed and was stimulated by frank conversation with other participants who come from different background, which made this meeting a fruitful one. 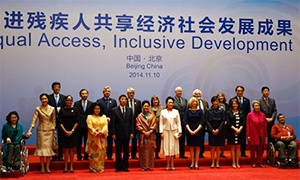 Mrs. Akie Abe attended APEC official event organized by China Disabled Persons' Federation. She was welcomed by Mrs. Peng Liyuan, the spouse of the President of the People's Republic of China, joined a group photo with other leaders' spouses.

Mrs. Peng Liyuan and the head of China Disabled Persons' Federation guided the spouses to visit an exhibition of art works of Chinese people with disabilities, then to see the disabled people's talent show. After joining another family photo, Mrs. Abe attended the APEC theme meeting of "promoting of people with disabilities to share the fruits of economic and social development." 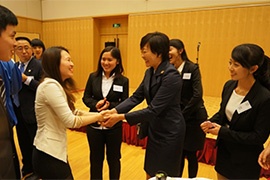 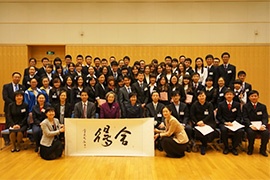 In the Embassy of Japan in Beijing, Mrs. Akie Abe met with about 65 youngsters who formerly visited Japan by JENESYS2.0 programme. During the event, Mrs. Abe joined each table to talk with all the participants. The meeting was held in friendly and warm atmosphere and she enjoyed listening to the members of their fortunate encounters and impression from Japan.

Mrs. Abe said to the participants "Please speak to your friends in China frankly on what you have felt through your visit to Japan. I hope you will be a linking bridge between Japan and China for the future."

(3) Visit to the Japan Foundation (Japanese cultural centre) in Beijing 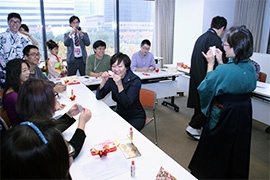 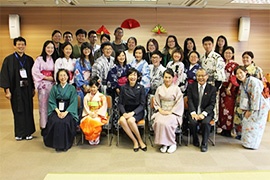 Mrs. Akie Abe visited the Japan Foundation (Japanese cultural centre) in Beijing. The director of the institute welcomed her and explained about their efforts. Mrs. Abe observed its cultural lessons of Japanese Shogi game, Origami (art of folding papers) and the way to wear Yukata (a kind of Kimono) respectively.

Mrs. Akie Abe expressed the gratitude to Mr. Li Minsheng, the lecturer of Shogi, who started introducing Japanese Shogi game in China in 1990s for his contribution for promoting Japanese culture and encouraged the students who are learning Shogi in the centre. She also enjoyed making Origami with Chinese youngsters.

(1) Visit to the Summer Palace / Luncheon hosted by Mrs. Peng Liyuang, the spouse of the President of the People's Republic of China 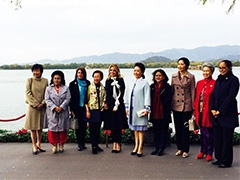 Mrs. Akie Abe participated in the APEC Leaders' spouse programme to visit the Summer Palace in Beijing. Mrs. Abe was welcomed by Mrs. Peng Liyuan, the spouse of the President of the People's Republic of China, and enjoyed a tour of the Summer Palace with other leaders' spouses. Mrs. Peng Liyuan guided the spouses to a boat tour to Kunming Lake, theatrical performances at the Dehe Garden, cable car tour and dancing performances.

(2) Visit to the Beijing Center for Japanese Studies 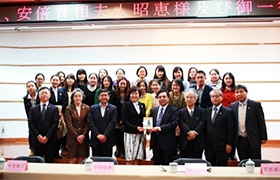 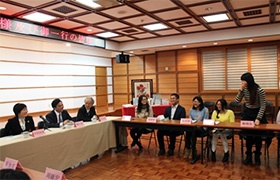 Mrs. Abe was welcomed by principal members of the center and donated "Akie Book Collection" to the institute. Mrs. Abe had a discussion with their students after that. The youngsters presented their research to Mrs. Abe and asked her various questions such as her impression on China (how it changed since her last official visit), her life style, and fashion. Mrs. Abe said "Through cooperation between Chinese and Japanese women, we would like to build a society where women shine,".

[Note] 1 JET Programme
JET stands for Japan Exchange and Teaching Programme. This program is operated through a partnership between the Ministries of Japan[Note] and local governments, and invites young people around the world to provide them opportunities to teach languages, sports, etc., in junior-high and high schools in Japan, and to work in local governments in order to promote international exchange in local communities.