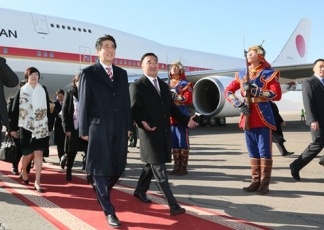 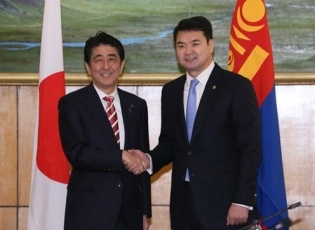 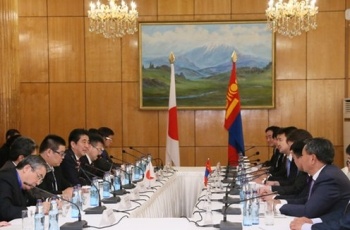 i) Prime Minister Abe noted that this was his second visit to Mongolia and his eighth Japan-Mongolia Summit Meeting, and explained that up to now no incumbent Japanese Prime Minister has visited Mongolia twice, and this visit demonstrates that the Abe administration places an emphasis on Mongolia in particular. In addition, Prime Minister Abe welcomed the frequent summit-level exchanges, such as visits to Japan made by three of Mongolia's leaders this year, and stated that he intends to make this visit a testament to the bond between the two countries and the development of  the "strategic partnership" between the two countries.

i) Prime Minister Saikhanbileg expressed his support for the Abe administration's Proactive Contribution to Peace policy, and explained that he will continue to  support it in the future.

ii) In response, Prime Minister Abe expressed his gratitude for Prime Minister Saikhanbileg's support for the Proactive Contribution to Peace policy, stated that Japan will contribute even more proactively to the peace and stability of the international community in the future, and explained that the Legislation for Peace and Security forms the core for putting the policy of Proactive Contribution to Peace into practice. He also noted that defense cooperation between Japan and Mongolia is increasing, and a Japan Self-Defense Force unit was dispatched to a multilateral military exercise (Khaan Quest) in June for the first time. Prime Minister Abe explained that in the field of capacity-building support, the JSDF is earnestly carrying out training in roadbuilding in Mongolia, and he hopes to further advance this cooperation and exchange. Additionally, he expressed his delight that a Japan-U.S.-Mongolia dialogue was able to be held for the first time in September, and stated that he hopes the strategic dialogue between the three countries will continue.

i) Prime Minister Abe explained that the international community should display solidarity over North Korea's nuclear and missile issues, and should strongly urge North Korea to exercise self-restraint in regard to provocative actions and fulfill United Nations Security Council resolutions. He also expressed his gratitude for Mongolia's understanding and support over the abductions issue, and his expectation that Mongolia will continue to cooperate on promptly resolving the issue. Furthermore, Prime Minister Abe expressed thanks for Mongolia's support for Japan becoming a permanent member of the UN Security Council and its engagement with the G4, and explained that he intends to continue to work together closely.

ii) Prime Minister Saikhanbileg stated that the relationship between the two countries should not only be a bilateral relationship, they should also cooperate in the international community. He highly appreciated Japan's role at the UN, expressed his support for Japan becoming a permanent member of the UN Security Council, and explained that Mongolia is also contributing to the stability of Northeast Asia.

i) Prime Minister Saikhanbileg stated that the mid-term action plan based on the ERCH Initiative is being implemented and noted in particular that the Japan-Mongolia Economic Partnership Agreement (EPA) has been signed and endorsed by both countries, and he reported that three bills necessary for the entry into force of the EPA were approved in Mongolia on October 22 (see note). Furthermore, he expressed his support for Japan dispatching experts to the Tavan Tolgoi coalmine and moving the East Line railway project ahead, and welcomed that a feasibility study will move forward and Japanese companies will participate in the Thermal Power Plant V project. Prime Minister Saikhanbileg also welcomed Japanese companies' cooperation on a new airport project, and expressed his intention to advance cooperation on airport management also. Moreover, he stated that Mongolia is prepared to dispatch construction workers to Japan for the 2020 Tokyo Olympics.

ii) Prime Minister Abe stated that clear and consistent economic policies are important, and Japan intends to continue to cooperate on Mongolia's development through initiatives such as dispatching economic advisors. He explained that large-scale mining development is an important pillar of Mongolia's economic development, and although Japan is unable to commit to the Tavan Tolgoi coalmine and East Line railway projects themselves at the present point in time, he intends to have parties from the Japanese side sincerely study the profitability and feasibility of the proposed content. He also welcomed a memorandum of cooperation signed in connection with this on October 22, and expressed his expectation toward Prime Minister Saikhanbileg's leadership in ensuring that a full explanation is given to Japanese companies in relation to this matter. Furthermore, Prime Minister Abe explained that he is overjoyed at the approval of the three bills and said that it is a great pleasure and also symbolic that this coincided with his visit to Mongolia, and he expressed his expectation that the relationship between the two countries will develop further through the EPA. He also welcomed Japanese companies' participation in the new airport construction, and that their knowledge and experience will be utilized.

i) Prime Minister Abe stated that his second visit to Mongolia has been achieved, as he had promised with President Elbegdorj, and he is delighted to hold his eighth meeting with the President. Prime Minister Abe explained that this visit is evidence of the strategic partnership and his friendship with the President, and expressed his gratitude for the support the President showed for the Proactive Contribution to Peace policy at their previous meeting. Additionally, he explained that although Japan is unable to commit to the Tavan Tolgoi coalmine and East Line railway projects themselves at the present point in time, he intends to have parties from the Japanese side sincerely study the profitability and feasibility of the proposed content, and welcomes the signing of a memorandum of cooperation on the same day.

(2) Meeting with Chairman of the State Great HuralEnkhbold

i) Ahead of the meeting, Prime Minister Abe stopped by the visitors' gallery inside the State Great Hural chamber, and received a welcome from members of parliament.

ii) In the meeting, Prime Minister Abe stated that this visit demonstrates the importance he attaches to Mongolia, and (1) welcomed the development of the "strategic partnership" as a result of frequent summit-level exchanges; (2) positively appreciated Chairman Enkhbold's visit to Japan in February this year, and expressed his expectation that exchanges between the two parliaments will increase further; and (3) welcomed the approval in the Mongolia's State Great Hural on the same day of the domestic amendment bills necessary for the entry into force of the  Japan-Mongolia EPA, and expressed his expectation that the economic relationship between the two countries will deepen through the EPA.

iii) In response, Chairman Enkhbold mentioned the importance of inter-parliamentary exchanges, and emphasized that he attaches importance to relations with Japan. He also stated that he intends to move various initiatives forward in order to further strengthen Japan-Mongolia economic relations.

Prime Minister Abe visited a monument for Japanese nationals who died while interned, which is located on the outskirts of Ulaanbaatar City, and made a floral tribute. This is the second time Prime Minister Abe has visited the monument, following his visit to Mongolia in March 2013.