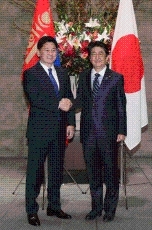 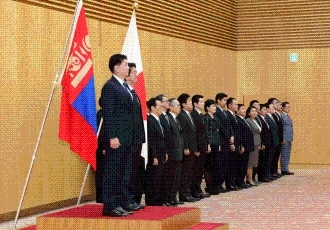 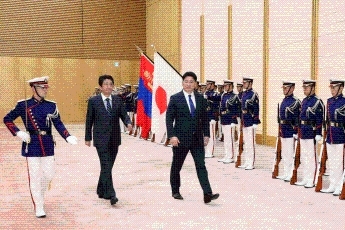 In addition, following the summit meeting the signing of the “Memorandum of Cooperation Between the Ministry of the Environment of Japan and the Ministry of Environment and Tourism of Mongolia on Environmental Cooperation” took place in the presence of the two leaders, and a Japan-Mongolia joint statement and fact sheet for the “Japan-Mongolia Mid-term Action Plan for a Strategic Partnership” were also issued. Following that the two leaders held a joint press announcement, and subsequently, a dinner hosted by Prime Minister Abe took place, and the conversation touched on a broad range of topics relating to the bilateral relationship.

2. Prime Minister Abe stated that the relationship has been growing stronger in a broad range of fields, building on the “Mid-term Action Plan” of March last year, and he intends to continue to deepen the relationship in accordance with that plan. In addition, Prime Minister Abe mentioned the success of the 9th Japan-Mongolia Government and Business Sector Joint Committee, and stated that he hopes to cooperate on strengthening the economic and business relationship through initiating such as the steady implementation of the Japan-Mongolia Economic Partnership Agreement (EPA). Prime Minister Abe also expressed expectation that under Prime Minister Khurelsukh’s leadership the negotiations on the concession agreement for the New Ulaanbaatar International Airport will be concluded early and the airport will open for use promptly. In response, Prime Minister Khurelsukh mentioned the Mongolian-side’s initiatives for strengthening economic relations, and expressed his determination to open the new airport promptly. The two leaders shared the view that they will promote cooperation on further strengthening trade and economic relations between the two countries.

4. The two leaders shared the view that the full implementation of the relevant United Nations Security Council (UNSC) resolutions by all members of the UN will be important for realizing the complete, verifiable and irreversible dismantlement (CVID) of all weapons of mass destruction and ballistic missiles of all ranges by North Korea. Furthermore, Prime Minister Abe emphasized the importance of resolving the abductions issue. Prime Minister Khurelsukh expressed support for Japan’s position on resolving the abductions issue, and the two leaders shared the view that they will continue to cooperate closely towards the early resolution of the issue.