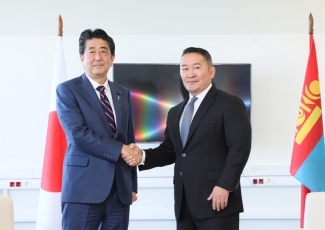 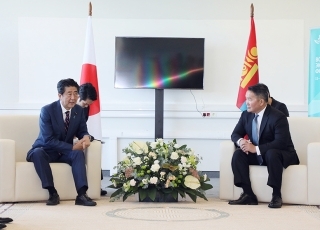 Photo: Cabinet Public Relations Office
On September 11, Mr. Shinzo Abe, Prime Minister of Japan, during his visit to Vladivostok, the Russian Federation to attend the 4th Eastern Economic Forum, held a Japan-Mongolia Summit Meeting commencing at 5:30 p.m. (local time) for approximately 50 minutes with H.E. Mr. Khaltmaa Battulga, President of Mongolia. The overview of the meeting is as follows.

Prime Minister Abe stated that he is happy to meet President Battulga again following last year's Eastern Economic Forum, expressed the view that cooperation between Japan and Mongolia is moving ahead in a broad range of fields based on the "Strategic Partnership," and explained that he intends to continue working hand in hand with President Battulga to further deepen bilateral cooperation.

Prime Minister Abe pointed out the importance of bolstering economic relations, including through the steady implementation of the Japan-Mongolia Economic Partnership Agreement (EPA). President Battulga explained the current state of mineral resources development in Mongolia and the situation concerning infrastructure cooperation with Russia and China in fields such as ports and railways. The two leaders coincided in their opinion that they will continue to exchange views, including these fields.

Prime Minister Abe emphasized that defense cooperation is steadily being enhanced, including the number of individuals who have completed national defense-related studies in Japan reaching more than 70 cumulatively, and stated that cooperation is also broadening in the field of Peacekeeping Operations (PKO), such as Defense Capacity Building Assistance for Mongolia and participation in the "Khaan Quest," a multinational exercise co-hosted by U.S. Pacific Command and the Mongolian Armed Force.

With regard to the tourism field, Prime Minister Abe expressed expectation for the New Ulaanbaatar International Airport, which will be built using Japanese Official Development Assistance (ODA) (yen loans), to be opened for use early under the President's leadership. In addition, President Battulga explained that he had inspected the site recently, and continues to make efforts towards the early opening of the airport for use. Furthermore, President Battulga also explained Mongolia's tourism development situation.
The two leaders also shared the view that they will utilize the occasion of the 2020 Tokyo Olympic and Paralympic Games as an opportunity to further promote people-to-people exchanges.

Prime Minister Abe stated that cooperation is moving forward based on the Joint Crediting Mechanism (JCM), and the two leaders shared the view that they will further deepen cooperation in the field of the environment, in various ways.

Prime Minister Abe mentioned the necessity for supporting the U.S.-North Korea process, and the importance of realizing the complete, verifiable and irreversible dismantlement (CVID) of all weapons of mass destruction and ballistic missiles of all ranges by North Korea, as is demanded by the United Nations Security Council (UNSC) resolutions. The two leaders shared the view that the full implementation of the UNSC resolutions is important.

In addition, the two leaders shared the view that they will continue to work closely together toward the early resolution of the abductions issue.