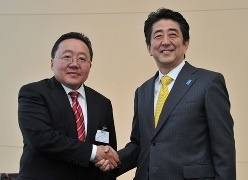 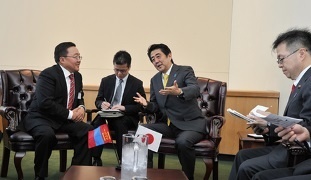 (1) At the beginning, Prime Minister Abe welcomed a reunion with President Elbegdorj after his visit to Japan in July, and said that together with President Elbegdorj he wants to further develop the "strategic partnership" between Japan and Mongolia in various fields, including foreign policy and security.
(2) President Elbegdorj replied that he is extremely happy about an achievement of an agreement in principle in the negotiations of  the Japan-Mongolia Economic Partnership Agreement (EPA), which was a priority issue when he visited Japan in July, and that it will be important to implement the agreed matter hereafter.
(3) Prime Minister Abe said he is pleased that an agreement in principle was reached in the Japan-Mongolia EPA negotiations in July, and he showed his intention to bring about the early entry into force. Furthermore Prime Minister Abe said the Government of Japan wants to advance the "ERCH Initiative Plus" for promoting exports and industrial diversification of Mongolia, and Japan is also proposing dispatching experts to assist Mongolia's economic policymaking.

(1) Prime Minister Abe mentioned that Mongolia is positioned between the two major nations of China and Russia, but Japan wants to cooperate with Mongolia as a "third neighboring country" and contribute to regional stability.
(2) President Elbegdorj responded by explaining that Chinese President Xi Jinping visited Mongolia in August and Russian President Vladimir Putin visited Mongolia in September, and he also outlined the China-Russia-Mongolia Trilateral Summit Meeting that took place on the sidelines of the Shanghai Cooperation Organization (SCO) summit in Tajikistan on September 11. President Elbegdorj said that because transport via China and Russia will become smooth, Mongolia wants to expand its cooperation with "third neighboring countries," beginning with Japan.

(1) President Elbegdorj said that where Japan-North Korea relations are concerned, Mongolia wants to cooperate by providing locations for meetings between Japan and North Korea, for example.
(2) In response, Prime Minister Abe expressed appreciation for Mongolia's understanding and cooperation.
(3) The two leaders confirmed that they will continue to cooperate on North Korea's abductions issue and other challenges in the future.

President Elbegdorj extended his congratulations to Prime Minister Abe, who recently celebrated his 60th birthday, and presented him with a red cashmere sweater as a birthday gift. (The sweater was manufactured at a plant built in Mongolia through Japan's cooperation, and was embroidered on the chest with the Japanese characters for 'katsuryoku' (vitality). (Note: The term "erch" in Japan's "ERCH Initiative" for providing industrial support to Mongolia means "vitality")).