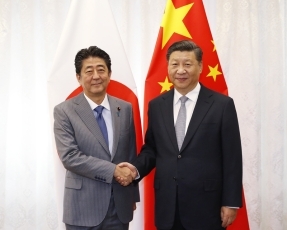 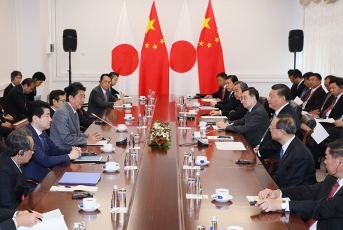 On September 12, Mr. Shinzo Abe, Prime Minister of Japan, during his visit to Vladivostok, the Russian Federation to attend the Eastern Economic Forum, held a Japan-China Summit Meeting commencing at around 11:50 a.m. (around 10:50 a.m. Japan time) for approximately 40 minutes (simultaneous interpretation) with Mr. Xi Jinping, President of the People’s Republic of China, at a bilateral meeting room within the forum venue. The overview of the meeting is as follows. (The meeting was attended on the Japanese side by Deputy Chief Cabinet Secretary Kotaro Nogami, Secretary-General of the National Security Secretariat Shotaro Yachi, Special Advisor to the Prime Minister Eiichi Hasegawa, Senior Deputy Minister for Foreign Affairs Takeo Mori, and others; and on the Chinese side by Central Committee of the Communist Party of China General Office Director Ding Xuexiang, Member of the Politburo of the Communist party of China Yang Jiechi, State Councilor and Minister of Foreign Affairs Wang Yi, National Development and Reform Commission Chairman He Lifeng, Minister of Commerce Zhong Shan, and others).

(1) The following is an overview of President Xi’s comments at the beginning.

i. I offer my sympathy over the typhoon and earthquake damage in Japan.

ii. Through our exchanges at international fora thus far and recent telephone talks, I have reached an important shared awareness with Prime Minister Abe that we will press ahead with constantly improving the Japan-China relationship.

iii. This year is the 40th anniversary of the conclusion of the Treaty of Peace and Friendship between Japan and China. As a result of efforts by both sides, the Japan-China relationship has returned to a track of normal development, and we are blessed with opportunities to improve and advance it. We intend to continue to proactively hold positive exchanges, and achieve greater progress amid the stable bilateral relationship.

i. My meeting with President Xi in Da Nang in November 2017 was a positive meeting that represented a “fresh start” to the Japan-China relationship. In the more than six months since then, exchanges and dialogue between the two countries have intensified in various fields, beginning with high-level visits, and the horizon of our bilateral cooperation is widening greatly.

ii. In May this hear I held our first Japan-China Summit Telephone Talks with President Xi, and immediately following that Mr. Li Keqiang, Premier of the State Council of China, paid an official visit to Japan for the first time in eight years. The Japan-China relationship has got back on to a normal track.

iii. Amid the major developments taking place in international affairs, including the North Korea situation and trade and investment, it is becoming increasingly important for Japan and China, which share a major responsibility for the peace and prosperity of the region and the world, to maintain close communication.

i. The two leaders shared recognition that this year is the 40th anniversary of the signing and conclusion of the Treaty of Peace and Friendship between Japan and China, and is simultaneously the 40th anniversary of China’s “reform and opening-up” policy, so this is a good opportunity to look back on the two countries’ progress over the past 40 years and reconfirm the starting points of their bilateral relationship.

ii. Moreover, the two leaders shared determination to advance Japan-China relations by connecting the current trend of improved bilateral relations through high-level and other visits to concrete results in various fields, including politics, the economy, foreign affairs, the maritime and security issues, culture and people-to-people exchanges.

iii. In this context, the two leaders shared the view that on the basis of the exchanges that took place when Premier Li visited Japan, they will promote third country cooperation and deepen the dialogue on innovation and intellectual property rights.

iv. The two leaders shared the view to utilize the 2020 Tokyo Olympic Games and 2022 winter Olympic Games in China as the opportunities to further promote people to people exchanges between the two countries.

(2) Dealing appropriately with matters of concern

i. Prime Minister Abe emphasized Japan’s position that there will be no genuine improvement in Japan-China relations without stability in the East China Sea in particular, and the two leaders shared the view that they will continue to make efforts together to make the East China Sea a “Sea of Peace, Cooperation, and Friendship.”

ii. Prime Minister Abe once again requested that import restrictions on foods produced in Japan, which have been in place since 2011, be lifted, and the two leaders shared the view that communication will continue at the working level. Prime Minister Abe expressed expectation that the lifting of the restrictions will be realized and leading to an increase in exports of Japanese rice to China.

(1) The two leaders confirmed that they will continue to coordinate closely towards the denuclearization of the Korean Peninsula, which is a common goal of both Japan and China.

(2) In addition, Prime Minister Abe explained that based on shared recognition regarding the importance of fully implementing the relevant United Nations Security Council resolutions, Japan hopes to work with China, including in addressing “ship-to-ship transfers.”

(3) Prime Minister Abe conveyed the view that Japan’s intention to comprehensively resolve outstanding issues of concern such as the abductions issue and the nuclear and missile programs and to pursue the normalization of diplomatic relations based on the Japan-North Korea Pyongyang Declaration will not change. Moreover, Prime Minister Abe obtained President Xi’s complete support with regard to Japan’s position on the early resolution of the abductions issue.