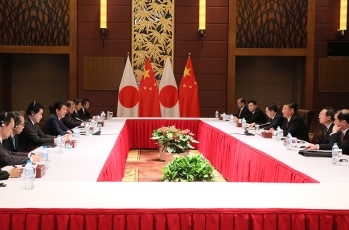 On November 11, commencing at about 6:30 p.m. (about 8:30 p.m. Japan time) for approximately 45 minutes (simultaneous interpretation), Mr. Shinzo Abe, Prime Minister of Japan, who is visiting Da Nang, the Socialist Republic of Viet Nam, to attend the Asia-Pacific Economic Cooperation (APEC) Economic Leaders’ Meeting, held a Japan-China Summit Meeting with Mr. Xi Jinping, President of the People’s Republic of China, at a hotel in Da Nang City. The overview of the meeting is as follows. (The meeting was attended on the Japanese side by Deputy Chief Cabinet Secretary Kotaro Nogami, Secretary-General of the National Security Secretariat Shotaro Yachi, Special Advisor to the Prime Minister Eiichi Hasegawa, Deputy Minister for Foreign Affairs Takeo Akiba, and others; and on the Chinese side by Central Committee of the Communist Party of China General Office Director Ding Xuexiang, State Councilor Yang Jiechi, Minister of Foreign Affairs Wang Yi, and others).

At the end of the meeting, the two leaders confirmed that they were able to hold an extremely productive exchange of views on Japan-China relations, the North Korea issue and other topics through this meeting, and that with this as a new beginning, they will continue to communicate in the future also.

(1) President Xi congratulated Prime Minister Abe on his reappointment. The following is an overview of President Xi’s comments.

i. I am happy to be able to meet Prime Minister Abe again in Da Nang. The APEC Economic Leaders’ Meeting that we both attended earlier was an excellent meeting.

ii. I am grateful for Prime Minister Abe’s congratulations on the 19th National Congress of the Communist Party of China.

iii. At the G20 Hamburg Summit in July we shared views on improving the bilateral relationship, and recently positive developments between Japan and China are increasing on both sides. In particular, I note that Prime Minister Abe attended the reception to commemorate the 45th anniversary of the normalization of diplomatic relations between Japan and China held recently at the Chinese Embassy accompanied by a large number of Cabinet ministers, which I greatly appreciate. I hope we can seize this positive trend and continue to move forward together with greater resolve and effort.

ii. Amid the new strengthening of the leaderships in both Japan and China, I intend to continue to proactively pursue improvements in the relationship under the “Mutually Beneficial Relationship Based on Common Strategic Interests,” while looking ahead to the 40th anniversary of the conclusion of the Treaty of Peace and Friendship between Japan and China next year.

iii. Both Japan and China shoulder a major responsibility as countries that are indispensable to the stability and peace of the region and the world. In particular, I intend to further deepen collaboration on responding to the pressing issue of North Korea. I welcome that China is implementing concrete measures in order to fulfill the United Nations Security Council (UNSC) resolutions, and hope for continued efforts.

iv. A soccer team of elementary students from Suzhou City in Jiangsu Province visited Japan at the end of July. I hope to build a foundation for a new era in Japan-China relations by deepening mutual understanding between the two countries through such exchanges.

From the standpoint of further pursuing improvements in the bilateral relationship, the two sides exchanged views on the major diplomatic schedule for Japan-China relations at important junctures such as the 45th anniversary of the normalization of diplomatic relations between Japan and China, and next year’s 40th anniversary of the conclusion of the Treaty of Peace and Friendship between Japan and China, including mutual visits by the two countries’ leaders, such as the visit to Japan by H.E. Dr. Li Keqiang, Premier of the State Council of China, for the Japan-China-Republic of Korea Trilateral Summit Meeting, Prime Minister Abe’s visit to China, and President Xi’s visit to Japan, as well as the early visit to China by Mr. Taro Kono, Minister for Foreign Affairs.

The two sides once again shared recognition that promoting people-to-people exchanges through tourism and other fields will be important to advancing Japan-China relations, and shared the view that they will further promote cultural and youth exchanges through anniversary events, and strengthen the trend toward expanding people-to-people exchanges while bearing in mind also the Olympic and Paralympic Games that will be held in Tokyo and Beijing in 2020 and 2022, respectively.

i. The two sides shared the view that developing the economic relationship is one of the most important foundations for both countries, and that cooperation will move ahead in a broad range of fields including finance, food trade, the environment and energy conservation, tourism, and the declining birthrate and aging population, and that exchanges between the two countries’ business communities will be encouraged.

ii. In addition, the two sides shared the view that it will be important to cooperate in order to build a win-win relationship that is free and open and based on rules, and that promoting business between private-sector companies as well as Japanese and Chinese business in third countries will also be beneficial to the development of the countries concerned, not just Japan and China.

iii. The two sides shared the view that they will together discuss how Japan and China will contribute to the stability and prosperity of the region and the world, including the “the Belt and Road” Initiatives.

(4) Dealing appropriately with matters of concern

i. Prime Minister Abe stated that there will be no genuine improvement in Japan-China relations without stability in the East China Sea, and the two leaders shared the view that they will continue to communicate in order to make the East China Sea a “Sea of Peace, Cooperation, and Friendship.”

ii. The two leaders once again shared the view that they will accelerate discussions between defense authorities in order to begin operating a maritime and aerial communication mechanism promptly. In addition, they shared the view that they will continue to work together so that the “2008 Agreement” on the development of natural resources in the East China Sea is upheld and concrete progress of implementing the Agreement is made.

iii. Prime Minister Abe pointed out that a free and open maritime order based on the rule of law is important in all regions. iv. Prime Minister Abe raised the matter of Japanese nationals detained in China and requested a positive response from China.

(1) The two sides held an extremely in-depth exchange of views on the recent North Korea situation. Prime Minister Abe expressed the view that the international community should maximize pressure on North Korea, and he requested further measures from China.

(2) The two sides confirmed that the denuclearization of the Korean Peninsula is a shared goal of both Japan and China, and shared the view that collaboration between Japan and China for regional peace and stability will deepen, including collaborating closely on the complete fulfilment of UNSC resolutions.

(3) Prime Minister Abe stated that resolving the abductions issue as quickly as possible is a top priority issue for the Abe Cabinet, and explained that he hopes for China’s support and cooperation.