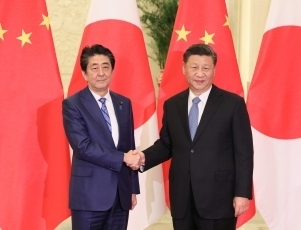 Japan-China Summit Meeting and Dinner2 Photo: Cabinet Public Relations Office
Mr. Shinzo Abe, Prime Minister of Japan, who is visiting the People’s Republic of China to attend the Japan-China-ROK Trilateral Summit Meeting, held a summit meeting with H.E. Mr. Xi Jinping, President of China, in Beijing on December 23, commencing at around 5 p.m. local time (around 6 p.m. JST) for approximately 45 minutes (simultaneous interpretation) as well as dinner, commencing at around 6 pm (around 7 p.m. JST) for approximately 1 hour and 10 minutes (consecutive interpretation), respectively. The overview of the meeting and dinner is as follows.

(1) The two leaders shared the view on continuing to work together to ensure a smooth and meaningful State Visit to Japan by President Xi next spring.
(2) Prime Minister Abe stated that Japan and China have a significant responsibility toward peace, stability, and prosperity of the region and the world, and expressed his desire to send out a clear message domestically and internationally of their intention to fulfill this responsibility. In addition, Prime Minister Abe wished that the two countries can demonstrate their determination to continue “ceaseless exchanges,” based on the need to strengthen and firmly establish reciprocal visits and dialogues at the high level, ensuring that the current momentum for improving and deepening Japan-China relations is not temporary.

(1) Based on the view that “there will be no genuine improvement in Japan-China relations without stability in the East China Sea,” Prime Minister Abe strongly requested China’s positive responses to the East China Sea issue, including waters surrounding the Senkaku Islands.
(2) In order to make the East China Sea a “Sea of Peace, Cooperation and Friendship,” the two sides confirmed that they will advance maritime security initiatives, including concrete initiatives under the Maritime and Aerial Communication Mechanism between defense authorities and the Japan-China Maritime Search and Rescue (SAR) Agreement and promotion of exchanges between defense and maritime law enforcement agencies.

(1) The two sides also welcomed the successful holding of the inaugural Japan-China High-Level People-to-People and Cultural Exchange Dialogue in November. The two sides shared the view on making next year the “Japan-China Culture and Sports Exchange Promotion Year,” and confirmed that tangible opportunities for exchanges will be established through next year’s Summer Games in Tokyo and the Winter Games in Beijing in 2022.
(2) The two sides welcomed the active tourism exchanges between Japan and China, and shared the view on further encouraging reciprocal visits between the people of both countries, including expanding their aviation relationship.

(1) The two sides shared the view on further strengthening cooperation in a variety of areas, including economic and practical cooperation between Japan and China. Prime Minister Abe expressed his desire for both countries to make efforts to realize an environment for equitable competition and develop a free and fair trading system.
(2) Prime Minister Abe strongly requested China’s forward-looking response for its early removal of import restrictions on Japanese food products, expanding rice exports, and resuming beef exports. With regard to beef, Prime Minister Abe appreciated China’s announcement on December 19 regarding removal of an import ban, noting that it is a positive measure, and expressed his intention to further accelerate coordination between their authorities for the swift resumption of exports to China.

6 Case of Detainment of Japanese Nationals

Prime Minister Abe continued to strongly requested China to take swift responses to the case of detainment of Japanese nationals.

7 Matters of Concern to the International Community

The two sides exchanged views regarding North Korean affairs, including the recent situations. Prime Minister Abe noted the importance of North Korea’s exercise of self-restraint from further provocations. The two sides then shared the view on the importance of coordinating toward the denuclearization of the Korean Peninsula, a goal shared by Japan and China, and of fully implementing United Nations Security Council resolutions. Furthermore, Prime Minister Abe sought China’s support for the early resolution of the abductions issue.

Regarding the South China Sea issue, which is a concern shared by the international community, Prime Minister Abe noted the importance of demilitarization of disputed features and the formulation of a Code of Conduct (COC) in line with the United Nations Convention on the Law of the Sea (UNCLOS).