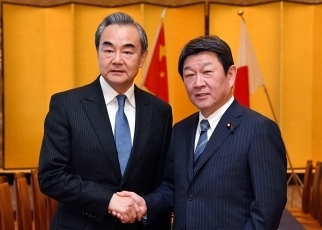 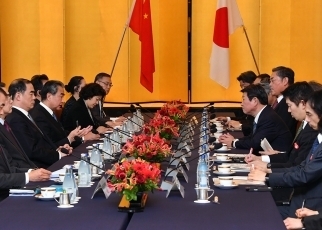 On November 25, commencing at 12:25 p.m., Mr. MOTEGI Toshimitsu, Minister for Foreign Affairs of Japan, held a working lunch (approximately 1 hour and 5 minutes) and a Japan-China Foreign Ministers’ Meeting (approximately 1 hour) with H.E. Mr. Wang Yi, State Councilor and Foreign Minister of the People’s Republic of China. The overview is as follows (From China, Mr. Kong Xuanyou, Ambassador of China to Japan, Mr. Luo Zhaohui, Vice Foreign Minister, and others attended, and from Japan, Mr. YOKOI Yutaka, Ambassador of Japan to China, Mr. TAKIZAKI Shigeki, Director-General of the Asian and Oceanian Affairs Bureau of the Ministry of Foreign Affairs, and others attended.).

The two sides shared the view on cooperating to ensure that President Xi’s visit to Japan next spring will be suitable for a “new era of Japan-China relations” and meaningful In addition, they confirmed that efforts by Japan and China, as world-class economic powers, to achieve a peaceful future for the world and address regional and international issues will lead to further strengthening the Japan-China relationship.

Regarding the Japanese nationals detained in China, Minister Motegi continued to request a positive response from China.

The two sides exchanged views regarding recent North Korean affairs, and shared the view on cooperating toward the denuclearization of the Korean Peninsula, which is a common goal of both Japan and China, and on the importance of the full implementation of UN Security Council resolutions. In addition, Minister Motegi asked State Councilor Wang for his understanding and support for the early resolution of the abductions issue.

Regarding the South China Sea issue, which is a concern of the international community, Minister Motegi noted the importance of demilitarization of disputed features.

The two sides discussed the current U.S.-China relations and exchanged views regarding relations with the United States. Minister Motegi noted the importance of finding solutions to issues through dialogue.