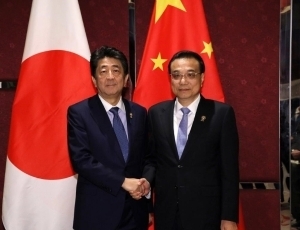 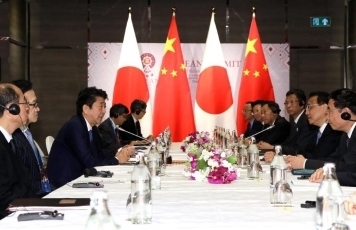 Photo: Cabinet Public Relations Office
On November 4, commencing at around 10:28 a.m. local time (around 12:28 p.m. JST) for approximately 25 minutes (simultaneous interpretation), Mr. ABE Shinzo, Prime Minister of Japan, who is visiting Bangkok, the Kingdom of Thailand to attend ASEAN-related summit meetings, held a Japan-China Summit meeting with H.E. Li Keqiang, Premier of the State Council of the People’s Republic of China. The overview of the meeting is as follows.

2 Japan-China relations and other matters

(1) The two sides confirmed that they will coordinate, including on the occasion of the Japan-China-ROK Trilateral Summit meeting, in order to ensure a meaningful State Visit to Japan by President Xi Jinping next spring. Prime Minister Abe then expressed his hope that Japan and China, as countries with a significant responsibility for the peace and prosperity of Asia and the world, will address the issues facing the region and the international community.
(2) Prime Minister Abe once again strongly requested China’s positive responses to: (1) the issue of China’s import restrictions on Japanese food products; (2) maritime and security issues, including the East China Sea such as waters surrounding the Senkaku Islands; and (3) detainment of Japanese nationals in China.
(3) Prime Minister Abe, expressed deep concerns over the situation in Hong Kong, urged for a resolution through the exercise of self-restraint and peaceful dialogue by the parties concerned, and noted the importance of the continued prosperity of a free and open Hong Kong under “one country, two systems.”
(4) Regarding the South China Sea issue, which is a common concern of the international community, Prime Minister Abe noted the importance of demilitarization of disputed features.
(5) The two sides shared the view on further strengthening cooperation in a variety of areas, including Japan-China economic and practical cooperation. Furthermore, the two sides confirmed that they will continue to cooperate toward the early conclusion of the Regional Comprehensive Economic Partnership (RCEP). Prime Minister Abe added that Japan will promote the implementation of international standards outlined in the “G20 Principles for Quality Infrastructure Investment,” and looked forward to China fulfilling a larger role and responsibility for advancing the reform of the World Trade Organization (WTO).
(6) The two sides discussed recent North Korean affairs and shared the view on the importance of fully implementing United Nations Security Council resolutions. In addition, Prime Minister Abe asked Premier Li for his understanding and support for the early resolution of the abductions issue.
(7) The two sides shared the view that they will continue to have these exchanges of views from a broad perspective, expecting President Xi’s State Visit to Japan next spring.