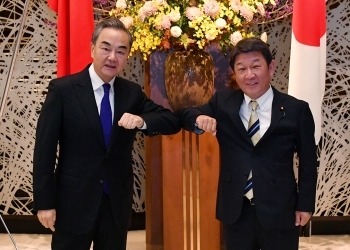 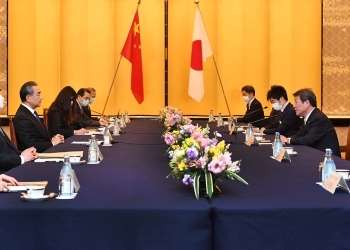 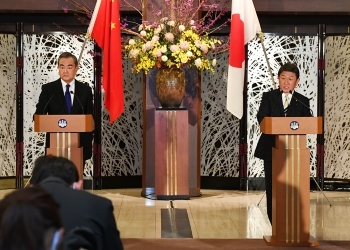 On November 24, commencing at around 5.30 p.m., Mr. MOTEGI Toshimitsu, Minister for Foreign Affairs of Japan, held a foreign ministers' meeting (for approximately 1 hour 30 minutes) with H.E. Mr. Wang Yi, State Councilor and Foreign Minister of the People's Republic of China, followed by a working dinner (for approximately 1 hour 10 minutes). A summary is given below (from China, Mr. Kong Xuanyou, Ambassador of China to Japan, Mr. Wu Jianghao, Assistant Minister of Foreign Affairs, and others attended; from Japan, Mr. MORI Takeo, Senior Deputy Minister for Foreign Affairs, Mr. TAKIZAKI Shigeki, Director-General of the Asian and Oceanian Affairs Bureau of the Ministry of Foreign Affairs, and others attended). Prior to the dinner, Minister Motegi and State Councilor Wang also held a one-on-one meeting (with only interpreters present, lasting approximately 30 minutes).

(1) Both ministers confirmed that stable Japan-China relations is vital for peace, stability and prosperity in the region and the international community, and that, as responsible major powers, addressing and contributing to various regional and international challenges together would lead to further strengthening of the relationship.

(2) Both ministers also welcomed the resumption of cross border visits of top officials between Japan and China brought about by State Councilor and Minister of Foreign Affairs Wang's visit to Japan, and confirmed the importance of continued high level communication. Accordingly, the two sides shared the view to proceed with various dialogues between diplomatic authorities under the "Annual Plan for Exchanges and Cooperation in 2021 between the Ministry of Foreign Affairs of Japan and the Ministry of Foreign Affairs of the People's Republic of China," which was drawn up to follow the plan for this year.

(1) The two sides affirmed that, with respect to COVID-19, they would continue to work together through diplomatic and other channels, including sharing information, lessons learned, and insights in a free, transparent and timely manner.

(2) In light of the fact that next March will mark the tenth anniversary of the Great East Japan Earthquake, Minister Motegi strongly reiterated his call for the prompt removal elimination of import restrictions on Japanese food products. In this regard, the two sides agreed to set up a "Japan-China Agricultural and Fishery Products Trade Cooperation Mechanism" with a view to accelerating discussions to solve this issue. The Minister also repeated his call for the early resumption of exports of Japanese beef and the prompt expansion of exports of Japanese rice.

(3) Both ministers welcomed the agreement to launch "Business track" and "Residence track" which made cross- border travel within between Japan and China, November. In this regard, Minister Motegi expressed his hope that this agreement will contribute to the revitalization of the Japanese and Chinese economies and facilitate mutual understanding.

(4) Minister Motegi once again requested that for the further development of the Japanese and Chinese economies, it is essential to build a truly fair, equitable and stable business environment, restating his call to protect the business activities of Japanese companies and to ensure a level playing field.

(5) The two ministers shared the view on further prompting cooperation in areas in which they have shared interests and agree on the direction such as the trade of agricultural products, cross-border and tourism, the environment, and energy conservation. They also agreed to strengthen bilateral communication, including setting up a framework for discussion on climate change issues.

The two ministers confirmed that they would work together for the success of the Tokyo Olympic and Paralympic Games next summer and the Beijing Winter Olympic and Paralympic Games in the following year. In addition, bearing in mind the 50th anniversary of the normalization of the Japan-China relations, they also discussed the promotion of exchange between the two countries and confirmed to promote youth exchange in order to develop their relationship in the medium- to long-term.

(1) In light of the recent situation in the East China Sea, including the waters around the Senkaku Islands, Minister Motegi conveyed Japan's concerns, referring to individual events, and strongly urged positive action on the part of China with regard to maritime and security issues. Additionally, in connection with the illegal operations of Chinese fishing vessels in the waters around the Yamato Bank, he strongly urged to prevent any recurrence and provide rigorous guidance to those engaged in fishing.

(2) Both ministers  shared their view of determination to make the East China Sea a "Sea of Peace, Cooperation and Friendship," which was confirmed among high-level officials, and they confirmed to promote efforts in the field of maritime and security issues. They welcomed the progress in coordinating the opening of a hotline under the Maritime and Aerial Communication Mechanism between the Japanese and Chinese defense authorities.

6 Contributions to the International Community

(1) The two sides shared the view to work together towards an early entry into force of the recently signed RCEP agreement.

(2) With a view to both Japan and China fulfilling their responsibilities as major powers, Minister Motegi encouraged Chinese efforts in the areas of debt issues, financial cooperation, climate change, trade and investment, as well as arms control and disarmament.

(1) Regarding the situation in Hong Kong, Minister Motegi conveyed his concern over recent series of developments, including the disqualification of members of the Hong Kong Legislative Council, saying that it is important that Hong Kong upholds a free and open system under the "One Country Two System" framework and strongly urged China to take appropriate action.

(2) Minister Motegi stressed the importance of universal values such as freedom, respect for human rights, and the rule of law in contributing to the region and the international community together. He encouraged the Chinese government to provide a transparent explanation of the human rights situation in the Xinjiang Uyghur Autonomous Region, which is generating increasing attention in the international community.

(1) North Korea
The two ministers exchanged views on the recent situation in North Korea and shared the view on the importance of working together for the denuclearization of the Korean Peninsula and the full implementation of Security Council resolutions. Minister Motegi also requested understanding and support aimed at the swift resolution of the abduction issue.

(2) The South China Sea
With respect to the South China Sea issue, which is a matter of concern to the international community, Minister Motegi voiced his concern about the current situation and indicated the importance of the rule of law and restraint.

(3) U.S.-China Relations
The two ministers also exchanged views on U.S.-China relations, and Minister Motegi stated that stabilizing their relation benefit the interest of the region and the international community, and encouraged China to respond appropriately from that perspective.