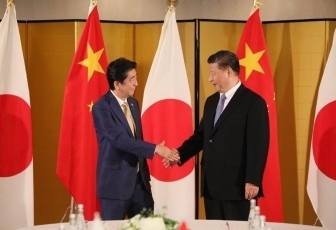 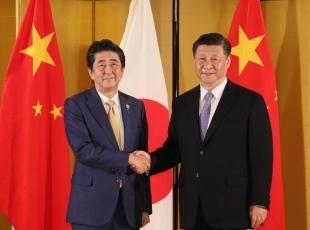 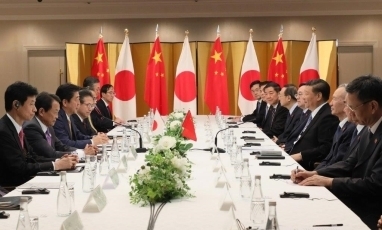 Photo: Cabinet Public Relations Office
On June 27, commencing at 7:36 p.m., Mr. Shinzo Abe, Prime Minister of Japan, held a Japan-China Summit Meeting (for approximately 60 minutes, simultaneous interpretation) and dinner (for approximately 70 minutes, consecutive interpretation) with H.E. Mr. Xi Jinping, President of the People’s Republic of China, during his visit to Japan to attend the G20 Osaka Summit. The overview of the meeting and dinner is as follows.

Chinese side: General Office Director of the Central Committee of the Communist Party of China (CPC) Ding Xuexiang, Vice Premier Liu He, Director of the Office of the Foreign Affairs Commission of the CPC Central Committee Yang Jiechi, State Councilor and Minister of Foreign Affairs Wang Yi, Chairman of the National Development and Reform Commission He Lifeng, Minister of Finance Liu Kun, Minister of Commerce Zhong Shan, Governor of the People’s Bank of China Yi Gang, Ambassador to Japan Kong Xuanyou, and others.

The two leaders shared the view on strengthening reciprocal visits and dialogues at a high level, including at the summit level, in order to have constant and close communications as eternal neighboring countries. As an important next step to this end, Prime Minister Abe, on behalf of the Government of Japan, invited President Xi to pay a state visit to Japan next spring, and President Xi accepted the invitation in principle.

The two leaders confirmed that they would aim to build constructive relations in the maritime security area, based on the recognition that they should be “partners who cooperate together and not become threats to each other” and “there will be no genuine improvement in Japan-China relations without stability in the East China Sea.” In particular, the two leaders shared the view on promoting and implementing the “2008 Agreement” regarding resource development in order to achieve the goal of making the East China Sea a “Sea of Peace, Cooperation and Friendship,” and on further strengthening dialogues in the areas of diplomacy and security.

The two leaders shared the view that, based on international standards and in the spirit of “from competition to cooperation,” the two countries would enhance mutually beneficial working-level cooperation in areas that have potential, such as third country markets, innovations and protection of intellectual property, trade and investment including foods and agricultural products, finance and securities, medical and nursing care, energy conservation and environment, and tourism exchanges, as well as further develop a free and fair trading system. In addition, the two leaders confirmed that the two countries would provide a fair, nondiscriminatory, and predictable business environment to each other’s companies.

The two leaders confirmed that mutual understanding would be deepened between the people of Japan and China through people-to-people exchanges, especially two-way exchanges between the young generation who will play a key role in the future of the two countries. Furthermore, the two leaders shared the view that both Japan and China would actively attract school trips to their countries through this year’s Japan-China Youth Exchange Promotion Year. The leaders also shared the view on establishing a high-level dialogue framework for people-to-people and cultural exchanges by the end of the year.

(5) Contribution to region and international community

The two leaders shared the view that both Japan and China, as major powers responsible for peace and stability in Asia and the world, would work shoulder to shoulder to make active contributions to wide-range of issues facing the region and the international community, including economy and trade, development assistance, environment, climate change, health and sanitation, and disarmament and arms control.

(1) President Xi explained the outcomes of his recent visit to North Korea, which was followed by candid exchanges of views between the two leaders. They confirmed that Japan and China will coordinate towards their common goal of the denuclearization of the Korean Peninsula.
(2) The two leaders confirmed the importance of the full implementation of United Nations Security Council resolutions, including addressing ship-to-ship transfers.
(3) President Xi stated that, during the recent China-North Korea Summit , he conveyed to Chairman Kim Jong-Un Japan’s position on Japan-North Korea relations and Prime Minister Abe’s views and also gained the support of  President Xi for improvement of Japan-North Korea relations, including the abductions issue.