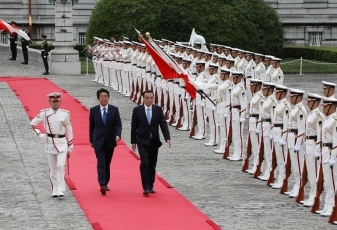 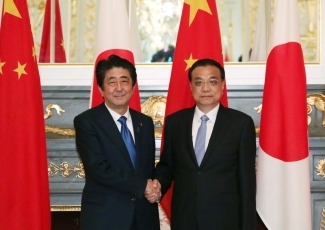 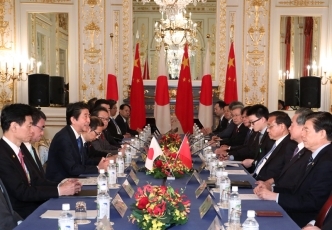 Photo: Cabinet Public Relations Office
On May 9, commencing at about 4:15 p.m. for approximately one hour and 50 minutes, Mr. Shinzo Abe, Prime Minister of Japan, held a Japan-China Summit Meeting with Mr. Li Keqiang, Premier of the State Council of China, who was paying an Official Visit to Japan, at the State Guest House, and hosted a Welcome Banquet. The overview is as follows.

(1) Prime Minister Abe congratulated Premier Li on his reappointment, and expressed his gratitude that Premier Li chose Japan as the destination for his first foreign visit after his reappointment. Furthermore, Prime Minister Abe stated that he wished to make the 40th anniversary of the conclusion of the Treaty of Peace and Friendship between Japan and China a year that would be a new start for Japan-China relations. The overview of his statements is as follows.  (2) The overview of the response from Premier Li is as follows.

(1) Premier Li explained about China's basic approach regarding Japan-China relations by elaborating on his opening remarks, and in response, Prime Minister Abe mentioned the 40th anniversary of the conclusion of the Treaty of Peace and Friendship between Japan and China while stating that he hoped to inherit the spirit of his predecessors to open up a new road towards matured Japan-China relations, and in particular, he emphasized the importance of building a relationship of trust between the two leaders.

(1) Prime Minister Abe explained that this year is the 40th anniversary of the reform and opening of China, that Japan has consistently supported and assisted the reform and opening-up policy of China, that Japan's investment in China is one trillion yen, Japanese companies have over 30,000 bases there which is contributing to China's employment, and emphasized the importance of building new cooperative relations in the economic field on this foundation. Premier Li reflected on Japan's engagement in the reform and opening policy of China to date and stated that he hoped to protect free trade together with Japan.

(2) The two leaders shared the view mainly regarding the following points, taking into account the discussions at the Japan-China High-Level Economic Dialogue held in April.

(1) The two leaders shared the recognition that good public sentiment is an essential foundation for the stable development of bilateral relations, and to utilize the opportunities of this year's events to commemorate the "40th anniversary", the 2020 Tokyo Olympics and Paralympics and 2022 Beijing Olympics and Paralympics to further promote people-to-people exchanges in every field, including tourism, culture, disaster risk reduction.

(2) Regarding tourism exchanges, the two leaders mentioned as many as 7.36million Chinese tourists visited Japan last year, and Premier Li has worked hard for youth exchanges between Japan and China for many years. They shared the view that they would continue to boost such exchanges among citizens.

(3) Prime Minister Abe mentioned the recent signing of the Japan-China Film Co-production Agreement and the fact that the Inter-Governmental Consultation on Japan-China Cultural Exchange was recommenced in April this year for the first time in nine years, reaffirming that he would advance cultural exchanges.

(5) Premier Li declared that China would give Japan two new crested ibises as a symbol of goodwill between the two countries, and Prime Minister Abe expressed gratitude.

(2) The two leaders shared recognition of the importance of fostering mutual trust in the maritime security field, and from this perspective, welcomed the fact that the Maritime and Aerial Communication Mechanism between the defense authorities of Japan and China had been concluded after ten years of consultations. Furthermore, they shared the view to take this opportunity to promote further dialogue and exchanges between the defense authorities of the two countries. In this regard, the importance of the field officer-level exchanges that were recently recommenced for the first time in six years was mentioned.

(3) The two leaders confirmed complete adherence to the 2008 Agreement regarding the development of resources in the East China Sea, and shared the view to further strengthen communication with the aim of recommencing consultations for its implementation.

(4) The two leaders shared the view to accelerate towards the early conclusion of the Japan-China Maritime Search and Rescue (SAR) agreement and expand cooperation in the fields of fostering the trust of the maritime law enforcement agencies and in maritime environment and maritime affairs. Furthermore, they confirmed the importance of frameworks such as the Japan-China Security Dialogue and the Japan-China High-Level Consultation on Maritime Affairs, etc.

(1) Prime Minister Abe stated that he held his first telephone talk with President Xi Jinping last week (May 4) and they were able to conduct a straightforward and meaningful exchange of views, while noting that the recent moves by North Korea were the result of the pressure by Japan, the United States and China cooperating with the international community to put pressure on North Korea, expressing his appreciation to China's efforts, including the visit to China by Chairman Kim Jong-un this week (May 7-May 8).

(2) The two leaders confirmed that the denuclearization of North Korea is a common goal of Japan and China, and welcomed the recent Inter-Korean Summit as a positive development.

(3) Prime Minister Abe stated that it is important for Japan and China to cooperate to ensure the realization of the disarmament of all weapons of mass destruction and ballistic missiles of all ranges in a complete, verifiable and irreversible manner by North Korea, and the two leaders confirmed that full implementation of the relevant United Nations Security Council resolutions continues as the common position of Japan and China.

(4) Prime Minister Abe communicated the idea that there was no change to the idea that Japan aims to comprehensively resolve outstanding issues of concern, including the abductions issue and nuclear and missile programs, based on the Japan-North Korea Pyongyang Declaration in order to normalize diplomatic relations, and Japan and China shared the view to cooperate towards the early resolution of the abductions issue.

(1) On May 9, commencing from about 7:05 p.m. for approximately one and a half hours, a Welcome Banquet hosted by Prime Minister Abe was held, and the two leaders conversed in a friendly atmosphere on topics such as economic exchanges.

(2) Those who have contributed to the development of Japan-China relations in the fields of politics, the economy, culture were invited to the Banquet.