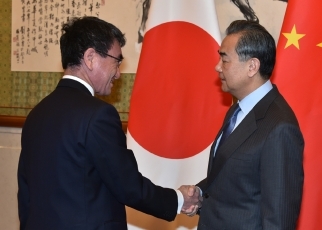 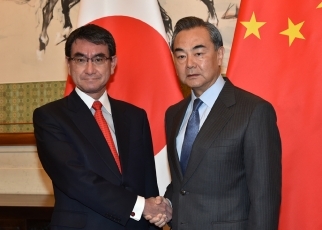 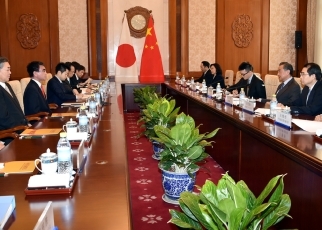 The two ministers had a dialogue with a constructive attitude in pursuit of improving the relationship on all fronts this year, the 40th anniversary of the conclusion of the Treaty of Peace and Friendship between Japan and China and the 40th anniversary of China's "reform and opening" policy, while looking back at the origins of the Japan-China relationship up to now.

In addition, the two ministers confirmed the importance of Japan and China both fulfilling their responsibility for the peace and prosperity of the region and the international society, and reconfirmed that Japan and China are "partners who cooperate together and are not threats to each other."

The two ministers reconfirmed the importance of realizing mutual visits by the leaders of Japan and China step by step, including a visit to Japan by H.E. Dr. Li Keqiang, Premier of the State Council of China, on the occasion of the Japan-China-Republic of Korea Summit, a visit to China by Mr. Shinzo Abe, Prime Minister of Japan, and a visit to Japan by Mr. Xi Jinping, President of China. Minister Kono once again explained that he hopes to welcome Premier Li to Japan, and the Chinese side replied that it intends to realize the visit as soon as possible. They shared the view that they will continue to concretely coordinate on this matter.

The two ministers discussed issues including the improvement of the business environment in Japan and China, and the development of businesses in third countries. In particular, they both welcomed the fact that they had reached substantive agreement on the Japan-China Social Security Agreement, and shared the view that they will cooperate toward the prompt signing of the Agreement.

Based on the importance of a free and open trade structure, the two ministers confirmed that they will work together to promote the Regional Comprehensive Economic Partnership (RCEP) and the Japan-China-ROK Free Trade Agreement (FTA).

The two ministers shared the view that their governments will support commemorative events held by both Japan and China this year, which marks the 40th anniversary of the conclusion of the Treaty of Peace and Friendship between Japan and China.

Minister Kono explained that following on from last year, this year also the Government of Japan intends to implement the "Three Bridges" project (Note) by inviting around 1,000 young people to Japan this year, and this plan was welcomed by the Chinese side.

(Note) The "Three Bridges" project
An exchange program involving approximately 1,000 people that is carried out through the Japan-China Afforestation and Tree-Planting International Solidarity project on the theme of promoting understanding of Japan. It comprises (i) regional exchanges, (ii) youth exchanges and (iii) cultural and sports exchanges. This year, Japan intends to carry out a project that focuses on elements including "university students, the Olympics and Paralympics, and soccer."

Minister Kono stated that the East China Sea should be a "Sea of Peace, Cooperation, and Friendship," and should not trigger circumstances that could undermine the improving Japan-China relationship, and he once again strongly demanded the prevention of the recurrence of the incident on January 11, in which a Chinese military submarine and ship navigated into the contiguous zone around the Senkaku Islands.

With regard to the Japan-China Maritime and Air Communication Mechanism between the defense authorities, based on the positive progress that was obtained at the Eighth Round Meeting of Japan-China High-Level Consultation on Maritime Affairs at the end of last year, the two ministers reconfirmed that Japan and China will continue to mutually cooperate in order to launch the Mechanism promptly.

Additionally, they confirmed that they will uphold the "2008 Agreement" on the development of natural resources in the East China Sea, and that they will continue to work together to make concrete progress on the implementation of the Agreement.

The two sides held an in-depth discussion on the North Korea situation. Minister Kono emphasized the need to continue to increase pressure in order to change North Korea's policies. The two ministers shared the view that they will continue to coordinate to realize the denuclearization of the Korean Peninsula, which is a common goal of Japan and China, while fully implementing the relevant UN Security Council (UNSC) resolutions.

Minister Kono once again raised the matter of Japanese nationals detained in China, and requested a positive response.