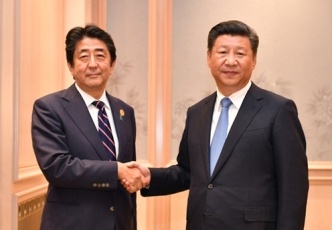 a. Regarding specific cooperation between Japan and China, Prime Minister Abe expressed his interest in the expansion of positive aspects of the relationship by moving forward with dialogue, cooperation, and interaction in a variety of areas, including the five areas of cooperation
(Note 1) and three common challenges (Note 2) proposed by Japan.

（Note 1）Five areas of cooperation: ((a) macro-economy, financial and monetary affairs, (b) energy-saving and the environment, (c) a low birthrate and an aging population, (d) tourism, and (e) disaster prevention)

（Note 2）Three common challenges: ((a) North Korea, (b) cooperation at the United Nations, and (c) counterterrorism and Middle Eastern affairs)

b. President Xi offered comments, looking ahead to next year and the subsequent year, and the two leaders agreed on the following points. c. Additionally, Prime Minister Abe mentioned the visit to Japan by Dr. Li Keqiang, the Prime Minister of the People's Republic of China, for the Japan-China-Republic of Korea Summit being held this year as well as the following points.

Prime Minister Abe stated that specific measures should be taken against repeated provocative actions by North Korea, such as the ballistic missiles fired today and SLBM launched last month and urged China to respond constructively as a responsible permanent member of the UN Security Council. He also expressed his hope for cooperation in addressing the abductions issues.