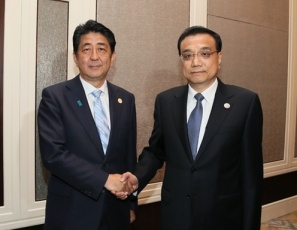 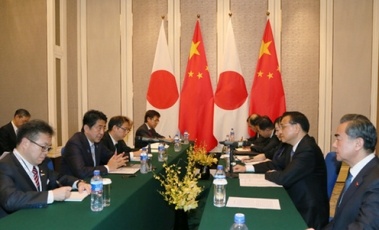 Photo: Cabinet Public Relations Office
On July 15, commencing at around 2:30 p.m. for approximately 30 minutes, Mr. Shinzo Abe, Prime Minister of Japan, who is visiting Ulaanbaatar, Mongolia to attend the 11th Asia-Europe Meeting (ASEM 11) Summit Meeting, held a Japan-China Summit meeting with H.E. Dr. Li Keqiang, the Premier of the State Council of the People's Republic of China. The overview of the meeting is as follows.
During the meeting, the two leaders mutually expressed their condolences over the casualties caused by the terrorist attack in Dhaka and the Chinese peacekeepers who lost their lives in South Sudan.

1 In his opening remarks, Premier Li Keqiang noted that this is his first meeting with Prime Minister Abe in eight months and that there is high media interest in whether or not the momentum of improvement in the Japan-China relationship can be sustained. Premier Li Keqiang stated that he wants Japan to comply with the four basic documents and strive to improve the relationship between Japan and China in line with the spirit of facing history and looking toward the future and that he hopes to frankly exchange views on issues of interest to both sides at this meeting.

2 In response, Prime Minister Abe explained that he is pleased to meet Premier Li Keqiang again, and although difficult issues remain between Japan and China, he hopes to proactively address common challenges. Prime Minister Abe stated that in particular, in light of the issue of the United Kingdom deciding to leave the European Union, he hopes to cooperate in the run-up to the G20 Summit to ensure that the global economy does not face a crisis, and that he also intends to further deepen cooperation with the international community, including China, so that terrorism does not permeate Asia.

Japan has always advocated the importance of peacefully resolving disputes based on the "rule of law."
The two leaders also held a frank exchange of views regarding the East China Sea.

6 Through the meeting, the two leaders shared views on the following points: