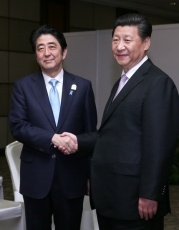 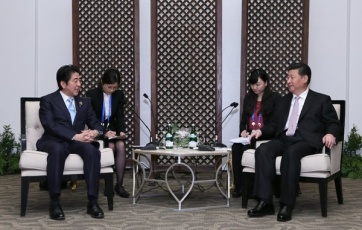 1. At the outset of the meeting, President Xi said it was his pleasure to meet Prime Minister Abe, taking an opportunity for both of them to participate in the commemoration of the 60th anniversary of the Asian-African Conference. President Xi stated the Japan-China Summit Meeting in the margins of the Beijing APEC had great significance and certain improvement in Japan-China relations had been seen, as a result of subsequent efforts by the governments and citizens of both countries.

2. In response, Prime Minister Abe said he was happy to meet President Xi again, and echoed the President in appreciating the fact that Japan-China relations had been improving since the Summit Meeting in Beijing. Prime Minister stated that the development of Japan-China relations would be beneficial for the citizens of both countries, and it was their joint responsibility to contribute to regional and global peace and prosperity by promoting the “Mutually Beneficial Relationship based on Common Strategic Interests”. Prime Minister told President Xi that he would like reinforce their joint endeavors to deepen dialogues and exchanges at various levels, including youth exchanges, and further advance Japan-China relations.

3. President Xi explained about some points that the Chinese side considered important for further improving the Japan-China relationship, and in the course of this, he touched on the Chinese side’s view on the issue of the recognition of history, as well as the concept of “One Belt, One Road” and the Asia Infrastructure Investment Bank (AIIB).

4. The gist of Prime Minister Abe’s response was as follows:
(1) I congratulate the success of the Beijing APEC, and once again appreciate the fact that we have seen improvements in Japan-China relations on various fronts since the Summit Meeting on that occasion.
(2) Mutual understanding between the citizens of the two countries is the foundation of our good relationship. Many Chinese tourists are visiting Japan recently, and I hope to further encourage dialogues and exchanges between the citizens of all levels, including youth exchanges.
(3) At the same time, tense situation in the East China Sea is continuing. Our common goal and interest is to make the East China Sea a “sea of peace, cooperation and friendship”, and this is something I would like to reconfirm with President Xi today. I am hoping to see the early commencement of the implementation of a maritime and aerial communication mechanism between the defense authorities. I would also like to accelerate a consultation to implement the “June 2008 agreement”.
(4) Dialogue in the security field is also important. In this regard, I welcome the resumption of the Japan-China Security Dialogue after four-year interval. I would like to further promote dialogue in this field, and contribute together to the peace and stability of the region and the international community.
(5) Concerning the issue of history, as I have reiterated many times, the Abe Cabinet upholds the position on the recognition of history outlined by the previous administrations in its entirety, including the Murayama Statement and the Koizumi Statement. As I also stated in my address at today’s commemoration event, Japan has followed and will follow the path of a peace-loving nation based on deep remorse over the past war.
(6) With regard to the AIIB, while Japan shares with others the recognition that there is a high demand for infrastructure in Asia, we need a clear explanation from the Chinese side as to how fair governance of the institution and borrowing countries’ debt sustainability will be ensured. With regard to the “One Belt, One Road” concept, I am paying attention to how that concept will be materialized.
(7) It was a pleasure meeting with President Xi and having a meaningful dialogue on the occasion of this commemorative event of the historic conference achieved through the leadership of President Sukarno and Premier Zhou Enlai, among others. When we have this kind of opportunity in the future, I would like to meet President Xi wherever possible, and continue to work together to further develop Japan-China relations.