Speeches by the Prime Minister 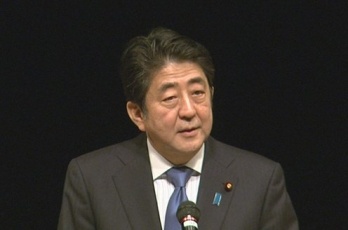 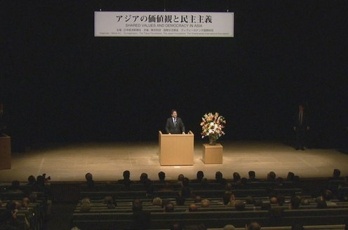 Distinguished guests, ladies and gentlemen,
Allow me to say that it is most timely that at the start of a new year, you have gathered to reflect on Asian values and democracy in the region.
The topic is fitting as we greet a new year, as it brightens our spirits, does it not? I have never once held even the slightest doubt that in Asia's future, democracy will take root.
Whatever twists and turns there may have been along the way, Asia is now poised to become a champion of democracy. I have been told that Asia has already surpassed any other region on earth in the number of people living under democracies.
In my view, democracy can never be anything but a work in progress. It is, and will forever remain, a work yet unfinished. First moving one way, then back again, it proceeds from one generation to the next, assimilating refinements atop still previous improvements. It knows no other way.
But there is one absolute requirement -- namely, being open to others while imparting mutual respect towards differing opinions and points of view.
It is here I believe we can be optimistic.
For example, we have here with us H.E. Dr. Susilo Bambang Yudhoyono. Take a look at his country, Indonesia. Or indeed, have a look at India, led by my valued friend Prime Minister Narendra Modi, who kindly gave us a message by video.
A tremendous number of languages, multiple religions, rapid economic development, and enormous changes throughout society. Whether you consider Indonesia or India, the people of these nations keep working within societies rich in diversity to make democracy take root.
As the great Swami Vivekananda stated at the Parliament of the World's Religions in Chicago 123 years ago, it is none other than the spirit of tolerance that formed India and Indonesia into the nations you see today.
The self-portrait of Asia that each of us should hold is one that should surely be drawn using warm colors, portraying tolerance.

Now, ladies and gentlemen, because of impediments like the walls between races and ethnicities, nationalities and religions, even in the 20th century, it was not until the latter half that we could say the values of freedom, democracy, and the rule of law were ''universal'' among the peoples of Asia and Africa in the true sense.
Which brings me back to memories of the 1964 Tokyo Olympics.
They were the first Olympic Games to come to Asia. In celebration of that, the Olympic Torch relay visited lots of countries in Asia. At each stop people shared in that celebration as their own. Even at only ten years old, I felt very gratified at that.
I also recall that I felt very upbeat, having heard that for many newly independent African states, the Tokyo Games were their very first Olympics. The athletes who marched below the flag of Northern Rhodesia for the opening ceremony held aloft the brand-new flag of Zambia during the closing ceremony. On that very same day as the closing ceremony Zambia achieved its independence.
Half a century has passed since then. The Olympic and Paralympic Games, having come to Seoul and Beijing, will again return to Tokyo.
A great many Asian countries have achieved remarkable economic development during this interlude. The sacred flame, which will soon burn against the Tokyo sky once more, will come to symbolize the rapid progress achieved by the region.
The 2020 Tokyo Olympic and Paralympic Games will surely also be an opportunity for many of our Asian friends, having persevered through numerous difficulties, to embrace democracy and mutually and vigorously confirm human rights and the rule of law to be principles that they themselves hold.
That's right, ladies and gentlemen: alongside Asia's growth and steady democratization, the universal values we speak of have become values that cover more people than any other region in the world, and ''universal'' in the true sense of the word. Can you think of anything else that could please us more?

And yet, Asia's democracy has a distinct mark engraved in it from ancient times, reflecting the values we have held dear for generations.
The statues of Buddha we see in Myanmar and Thailand sometimes lie on their side, truly feeling at ease.
Japan's Buddha statues, perhaps because they are in Japan, are quite upright, standing or seated, but the features we all think of are invariably those of a kindly face.
We have been taught that theirs is a face of 'lovingkindness'.
As a child, I was also told that ''medicine is a 'benevolent art'.'' I knew that the Confucian concept of ''benevolence'' should mean loving attachment and a kind spirit.
Those of you from Indonesia, Malaysia, or Pakistan will, I believe, say that you find a morality identical to lovingkindness and benevolence within the teachings of Islam as well. Japan, too, has a tradition of putting the utmost priority on harmony.
Mahatma Gandhi himself said, did he not, that for him democracy was something that would give the weak the same chance as the strong.
I have renewed my belief that, within the veins of water that have run continuously since ancient times under the ground upon which we stand, there is endless nourishment fostering democracy and imparting value to freedom and human rights, namely tolerance and lovingkindness.

4 Due process and the rule of law

We say that the democracy found in India demonstrates its durability during each and every election.
The same was the case with Taiwan, as we learned just three days ago. I heard that the election held recently in Myanmar was also conducted in a fair manner, impressing observers from abroad, including Mr. Yohei Sasakawa, who headed the Japan mission.
Democracy is always a work in progress. Still, it is an unmistakable truth that what improves it one step at a time is a commitment to due process and an adherence to the rule of law.
The same is true with fostering civil servants immune to bribery, police and judicial administration that are impartial, and a military organization serving under civilian control.
The foundation for everything is ensuring due process while promulgating the rule of law. This is what we ourselves have learned over a long time.
And yet, creating and then upholding just, fair, and transparent procedures and making the rule of law absolutely steadfast is also ultimately up to the skills of human beings. Everything starts from making each individual human being wiser and stronger.
And it is that awareness post-war Japan has held dear.
Japan wasted little time after losing the war in beginning its assistance to other Asian countries, acting under the credo that it is human resources development that brings about nation building, and that there can be no nation building without human resources development. This became Japan's approach in carrying out foreign assistance and is the approach we still embrace today. I believe you can agree with me on that.

5 On the bank of the "Mother Ganges" River

It was a little more than a month ago while I was visiting India that Prime Minister Modi kindly took me to Varanasi. There I experienced with him a Ganga Aarti ceremony, which began just as dusk fell and was gorgeously showy within a solemn atmosphere.
I knew that Varanasi was among the most sacred places, and while observing the ceremony, one thought after another struck me.
A feeling of respect for the flow of water... that is something we Japanese need no explanation to grasp. I might also add that this is why the Government of Japan has for a long time lent a helping hand in the remediation of the River Ganges.
Varanasi also reminded me of samsara, a teaching the Japanese have also valued since ancient times. People are born and ultimately die and transform into something else, and that is precisely why we must live treasuring the present. Somehow, we have been thinking that way.
Though I could not make it during my last trip, I knew that nearby was the place where the Buddha bestowed his very first teachings to his followers.
He told them to venture forth for the gain of many. This teaching spread to far-off Japan and lives on today as a sutra.
On the bank of the Mother River, as I allowed myself to become lost in the music and the rhythmic movement of the flames, I was dazzled at the bottomless depths of history connecting both ends of Asia.
Be it lovingkindness, benevolence, fraternity, or harmony, I believe that in Asia, there extends an underground rootstock of thinking that supports democracy and values freedom and human rights.
From there, a beautiful and large-blossomed lotus flower is now coming into bloom. Coupled with increasingly flourishing trade and investment, it is bringing peace and prosperity to Asia. If this is not something for us to rejoice about, then I must ask, what on earth is?
At the beginning of a new year, as we unmistakably feel the curtain lifting on a new era for Asia, an era in which we make freedom, human rights, and democracy our own and respect the rule of law, Japan reaffirms its determination to continue to be a member of Asia that you can count on. With that resolve, I conclude my remarks.

Thank you very much.
Page Top
Back to Speeches by the Prime Minister