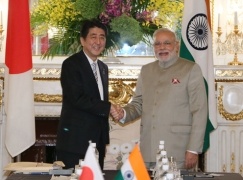 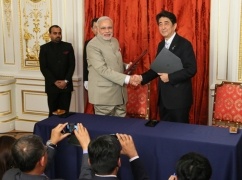 Prime Minister Shinzo Abe held a Japan-India Summit Meeting with H.E. Mr. Narendra Modi, Prime Minister of India on Monday, September 1, from around 6:00 p.m. to around 7:00 p.m.. The overview of the meeting is as follows. After the meeting, the two leaders signed a joint statement entitled "Tokyo Declaration for Japan-India Special Strategic and Global Partnership".

Prime Minister Abe explained his goal of achieving a society in which women shine and said he wants to advance cooperation with India, too. He also mentioned the importance of substantially increasing the number of international students and fundamentally strengthening cooperation in science and technology. Prime Minister Modi said he shares recognition on the importance of cooperation in cutting edge fields of science and technology and youth exchanges.

(Open a New Window)
Page Top
Back to Japan-India Relations