The 8th Japan-India Joint Committee on Science and Technology Cooperation 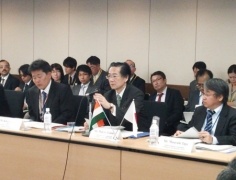 In the Joint Committee meeting, both sides shared the overviews and progresses on their science and technology policies, reviewed the development of mutual cooperation in the areas such as life sciences, basic physics, ocean and space with a view to further strengthening and deepening science and technology cooperation between Japan and India. Both sides also exchanged views on possibilities of expanding collaboration in the future including human exchange.

Noting that a number of cooperative activities have been undertaken between Japan and India since the entry into force of the Agreement between the Government of Japan and the Government of India on Co-operation in the Field of Science and Technology, signed in 1985, the co-chairs expressed their hope for further development of cooperation between the two countries not only for deepening the bilateral relationship but also for contributing to addressing global challenges.

Both sides agreed to hold the next joint committee in India and the specific date of the meeting will be coordinated through diplomatic channels.