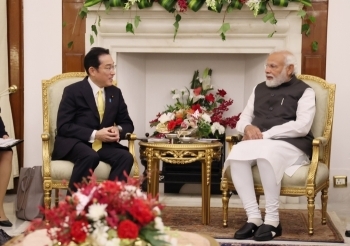 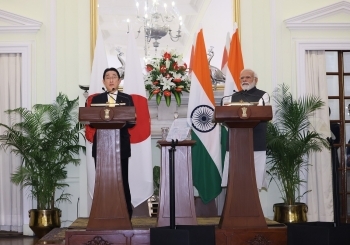 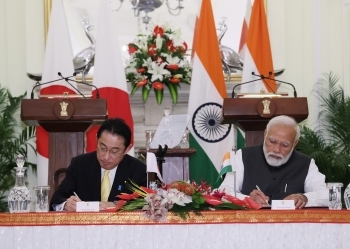 The two leaders reaffirmed that under the current international circumstances, it is important for Japan and India, which share fundamental values such as democracy and rule of law, to work closely together bilaterally as well as multilaterally such as Japan-Australia-India-U.S. toward realizing a “Free and Open Indo-Pacific.” In addition, the two leaders affirmed that they will discuss practical cooperation in various areas such as vaccine cooperation, infrastructure, climate, and technology, and regional issues which the four countries are facing, at the Japan-India-Australia-the U.S. Summit meeting which is under coordination to be held in Japan in the next few months with the participation of Prime Minister Modi.

Prime Minister Kishida strongly condemned Russia’s aggression against Ukraine as it clearly violates the international law. He also stated that, as a Prime Minister from Hiroshima, the city which suffered from an atomic bombing, he considered neither the threat nor the use of nuclear weapons should never be tolerated. Prime Minister Kishida also emphasized the need for the international community to be united and respond to this matter resolutely. Both leaders shared the importance to call for immediate ceasefire and resolving the situation through dialogue. Prime Minister Kishida requested Prime Minister Modi for his cooperation including further talking to President Putin. The two leaders confirmed anew that any attempt to unilaterally change the status quo by force is unacceptable not only in the Indo-Pacific but also in any region, and a peaceful resolution based on international law needs to be sought. The two leaders affirmed that the current situation makes it more relevant to further promote efforts toward the realization of a “Free and Open Indo-Pacific.”
Considering the deterioration of the situation, Prime Minister Kishida expressed his intention to provide additional assistance to Ukraine and neighboring countries, in addition to already announced 100 million US dollars of assistance, and both leaders confirmed to work together on humanitarian assistance as well.

Prime Minister Kishida and Prime Minister Modi concurred to strongly object to the economic coercion and the attempts to unilaterally change the status quo by force in East and South China Seas.
The two leaders also shared their views on the situation of North Korea, including issues such as the recent launches of ICBM-class ballistic missiles by North Korea, and reaffirmed to keep cooperating on matters related to North Korea including abductions issue.
Regarding the situation of Myanmar, the two leaders reaffirmed that they will continue to support the initiatives of ASEAN, in particular Cambodia, the ASEAN Chair, and work together to resolve the situation.

Prime Minister Kishida stated that he would like to take over the history built by the predecessors and open a new page in the Japan-India relations with Prime Minister Modi in the 70th anniversary of the establishment of diplomatic relations, and Prime Minister Mod assured it. The two leaders confirmed to put the annual mutual visit back on track, and Prime Minister Modi consented to the invitation of Prime Minister Kishida’s invitation to visit Japan.
In addition to the Prime Ministers’ reciprocal visits, the two leaders concurred to hold multilayered dialogues between relevant Ministers, as well as the second Japan-India Foreign Ministers and Defense Ministers meeting (“2+2”) at an early date. They welcomed bilateral defense collaboration between the two countries being strengthened as exemplified by application of ACSA during joint exercises, as well as active multilateral collaboration through Malabar exercise, a joint exercise among Japan, India, US and Australia, etc.
While welcoming the signing of the Memorandum of Cooperation in the field of cybersecurity which was agreed upon during this visit, the two leaders concurred to jointly tackle common issues of economic security, including building safe and secure telecommunication network and diversification and enhancement of supply chains.

The two leaders affirmed to continue their cooperation through enhancing initiatives such as Industrial Competitiveness Partnership and Japan-India Institute for Manufacturing (JIMs). Prime Minister Kishida stated that India is an important partner in “new form of capitalism” which he advocates, and the two leaders concurred to setting a target of5 trillion yen of public and private investment and financing from Japan to India. Prime Minister Kishida also asked Prime Minister Modi to support for further improvement of the business environment for smooth operation of Japanese companies in India.
In the field of economic cooperation, Prime Minister Kishida referred to Seven Yen Loan Projects amounting to over 310 billion yen which were signed upon the same day, and stated that the Government of Japan would like to continue to support sustainable growth of India through cooperation in building quality infrastructures in India. In response, Prime Minister Modi expressed his appreciation to Japan’s support. The two leaders welcomed the steady progress of the High-Speed Rail project and confirmed that they would continue to promote it as a flagship project of Japan and India. In addition, the two leaders welcomed the launch of the ”India-Japan Sustainable Development Initiative for the North Eastern Region of India” and confirmed to steadily implement cooperation in development of the northeastern part of India to enhance regional connectivity. The two leaders also welcomed the extension of the bilateral currency swap arrangement totaling USD 75 billion.
In addressing the importance of steady efforts by both countries regarding climate change, both leaders reaffirmed to work together towards global carbon neutrality, diverse and realistic energy transitions through frameworks such as the newly announced "Japan-India Clean Energy Partnership", which would also contribute to energy security.
In addition, the two leaders agreed to promote cooperation in urgent issues such as digital technology or healthcare including measures against COVID-19. They also welcomed the lifting of export ban on Japanese apples to India and the simplified procedure for importing Indian mangoes to Japan.

On the occasion of the 70th anniversary of the establishment of diplomatic relations between Japan and India this year, the two leaders shared their views to promote people-to-people exchanges including youth exchanges, sports exchanges, tourism, and the Specific Skilled Workers in the post COVID-19 era. They also welcomed the progress of cooperation in the space domain, including the lunar polar exploration jointly planned by Japan and India, and confirmed continued cooperation between Japan and India. Prime Minister Kishida expressed appreciation to India for taking part in the 2025 Osaka-Kansai Expo, and the two leaders confirmed to work together for the success of the Expo.

In response to the current situation in Ukraine, while the calls for reforming UN Security Council is increasing, the two leaders, as important G4 partners, confirmed to make effort to reform the UN Security Council to suit the current world situation. They reaffirmed their shared recognition that Japan and India they are legitimate candidates for permanent membership in the UN Security Council, and confirmed their unity.
In addition, Prime Minister Kishida stated his determination to lead international efforts in the field of nuclear disarmament as a Prime Minister from Hiroshima, and the two leaders confirmed to cooperate toward the goal of realizing a "world without nuclear weapons."