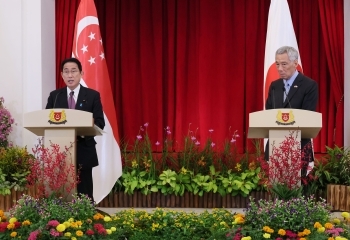 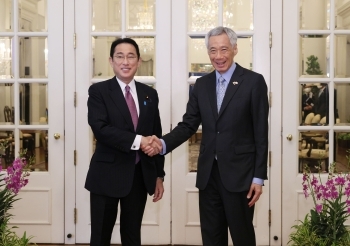 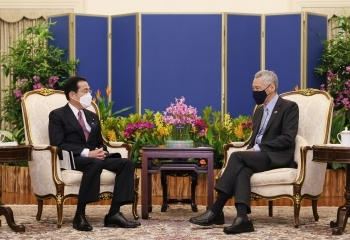 (a) The two leaders welcomed the commencement of negotiations on Agreement concerning the Transfer of Defense Equipment and Technology and concurred to further embody security cooperation, in light of the revision to the Memorandum on Defense Exchanges between defense authorities.
(b) The two leaders concurred to expand the range of bilateral cooperation in the field of economic security, including conducting training for third countries by the end of this year through utilizing both countries’ expertise, with the aim of building greater resilience of regional supply chains.
(c) The two leaders confirmed that they would promote cooperation in the digital field and in particular, concurred to hold meetings of experts from the two countries at an early date.
(d) While Prime Minister Lee expressed his support for an“Asia Zero Emissions Community” vision, the two leaders concurred to work together in the area of climate change and efforts for de-carbonization.

(3) Regional Affairs and Cooperation in the International Arena

The two leaders concurred to continue to collaborate in various issues, such as the response to situations in Ukraine, the East and South China Seas, and North Korea including its nuclear and missile activities as well as the abductions issue, free trade including the TPP, disarmament and non-proliferation, and the reform of the United Nations including the Security Council. 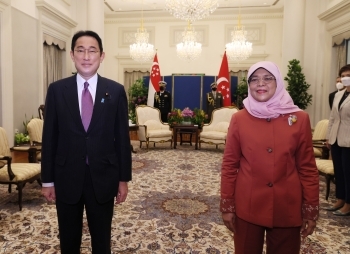 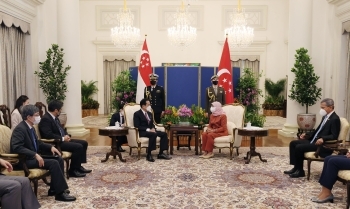 Prime Minister Kishida held a meeting with President of Singapore Halimah Yacob. They exchanged views on a wide range of issues common to both countries, such as bilateral economic relations, measures against COVID-19 including the easing of border measures, digital, climate change, and the declining birthrate and aging population. They concurred to continue coordination in regional and global issues, including the situations in Ukraine, North Korea, and the TPP. President Halimah Yacob expressed her expectation Japan to play a role towards a “world free of nuclear weapons”. President Halimah Yacob also hoped the revitalization of cross-border travel while welcoming Japan’s policy for easing border measures. 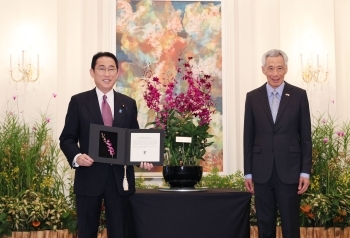 A welcome ceremony and an orchid naming ceremony hosted by Prime Minister Lee were held, commencing at 10:00 a.m. (local time) for approximately 10 minutes. In the welcome ceremony, a salute and guard of honor ceremony was held. The orchid naming ceremony was organized by the government of Singapore to give a name to a new variety of orchid in commemoration of friendly relations between the two countries, the new orchid was named Dendrobium Kishida Fumio.