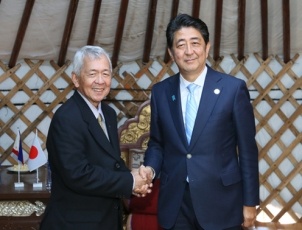 On July 15, commencing at 6:10 p.m. (same time both locally and in Japan) for approximately 25 minutes, Mr. Shinzo Abe, Prime Minister, received a courtesy call from H. E. Mr. Perfecto R. Yasay Jr, Secretary of Foreign Affairs of the Republic of the Philippines, in Mongolia, where he is attending the 11th Asia-Europe Meeting (ASEM 11) Summit Meeting. The overview is as follows. Mr. Hiroshige Seko, Deputy Chief Cabinet Secretary, and others were also present during the courtesy call.

1. Prime Minister Abe and Foreign Secretary Yasay confirmed that the cooperative relationship between the two countries has been developing in a wide range of fields in recent years under the close partnership, and they hope to develop it even more robustly under the new administration of Mr. Rodrigo Duterte, President of the Philippines.

2. Prime Minister Abe stated that in Mindanao, where Foreign Secretary Yasay is from and where President Duterte served as Mayor, Japan has been contributing on both the tangible and intangible fronts, centering on the field of infrastructure development in particular, and explained that Japan now intends to develop an even more powerful partnership with the Philippines as a whole. Prime Minister Abe also stated that the participation of the Philippines in the TPP will contribute significantly to regional stability and prosperity, and going forward Japan intends to cooperate as much as possible, beginning with providing information. Furthermore, Prime Minister Abe expressed his hope that President Duterte will visit Japan.

In response, Foreign Secretary Yasay conveyed his gratitude for the congratulatory message that the Philippines received from Japan upon President Duterte’s inauguration, expressed his condolences over the large number of Japanese nationals who lost their lives in the terrorist attack in Dhaka, Bangladesh, and explained that he is deeply grateful for Japan’s support for Mindanao thus far. Foreign Secretary Yasay stated that he hopes Japan’s support in the field of infrastructure, including improving the movement of goods, will continue, along with explaining that he hopes Japan will also consider providing support for the development of the steel industry.

3. Prime Minister Abe and Secretary of Foreign Affairs Yasay also exchanged views on the issues surrounding the South China Sea, and in light of the arbitral tribunal final award, confirmed close cooperation between the two countries in ASEAN-related meetings to ensure the dispute is resolved peacefully by the parties’ compliance with the award.