Japan-Philippines Joint Declaration
A Strengthened Strategic Partnership for Advancing the Shared Principles and Goals of Peace, Security, and Growth in the Region and Beyond 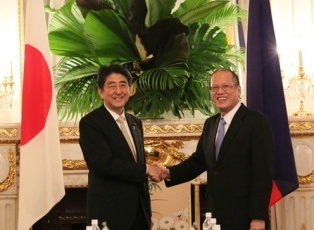 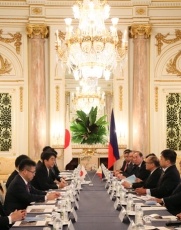 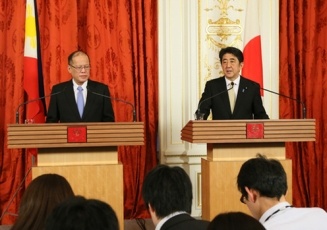 1. On the invitation of the Government of Japan, His Excellency Benigno S. Aquino III, President of the Republic of the Philippines paid a State Visit to Japan from 2 to 5 June, 2015. In the summit meeting on 4 June, Mr. Shinzo Abe, Prime Minister of Japan and President Aquino jointly declared that the relationship between the two countries has entered the stage of Strengthened Strategic Partnership in which the two countries cooperate for shared principles and goals in the Asia-Pacific region and beyond, recognizing that the relationship has become even closer and more dynamic. Since the establishment of diplomatic relations in 1956, bilateral relations, especially under the current leaderships of both countries, have reached an excellent stage today. Both leaders reaffirmed the following guiding principles for the future relationship between the two countries and endorsed the “Action Plan for Strengthening of the Strategic Partnership” annexed to this Declaration.

I Strategic Partnership for Shared Principles and Goals

2. Japan and the Philippines share common goals of ensuring peace and stability in the Asia-Pacific region, promoting economic growth of the region, and addressing international challenges including achieving human security. The significance of the Strategic Partnership of both countries is anchored on collaboration and cooperation under shared universal values including freedom, democracy, the rule of law, respect for basic human rights, and a free and open economy. Both countries are fully committed towards further strengthening the Partnership, aware of the increasing and complex challenges facing the region and the international community.

3. The Partnership is founded on the long-standing friendship between the peoples of both countries. In particular, after WWII, both countries have successfully constructed one of the strongest relations in Asia through the graciousness of the Filipinos and the full and sustained assistance provided by Japan, including its Official Development Assistance, culminating in the Strategic Partnership both countries share today. This 70-year history demonstrates to the world that through their relentless efforts, peoples of two countries can attain a remarkable achievement in overcoming issues of the past and establishing strong friendship. The Philippines commends Japan’s consistent path as a peace-loving nation and its contribution to global prosperity.

5. Both countries reiterate their resolve to contribute to peace and stability in the international community. Japan will pursue this resolve through its initiatives including the Legislation for Peace and Security under the banner of “Proactive Contribution to Peace” based on the principle of international cooperation. The Philippines appreciates and supports these efforts and expresses its willingness to share the Philippines’ experience in various UN peacekeeping operations over the years.

6. Maintaining open and stable seas is essential in ensuring regional stability and is an imperative issue which both countries, as maritime nations, are jointly addressing through enhancing the capacity of the Philippines Coast Guard (PCG). Both leaders welcome the progress in the Philippines’ acquisition of patrol vessels, with the contract signed today between the Government of the Philippines and the Japan Marine United Corporation. Japan is grateful for the Philippines’ choice for Japanese expertise and technology in this area. Building on the achievement of long-standing cooperation, including the PCG’s human resources development, both countries will continue cooperation and will also enforce their discussion aiming at further capability enhancement of the PCG.

III Towards Enduring Peace in Mindanao

7. The Government of Japan recognizes the Philippines’ commitment towards lasting peace, stability and development in Mindanao and supports the latter’s steady implementation of economic development projects based on the Bangsamoro Development Plan. To that end, the Government of Japan will advance the new phase of Japan-Bangsamoro Initiatives for Reconstruction and Development (J-BIRD2) which will focus more on ensuring economic autonomy in the Bangsamoro Area. These efforts will also open up opportunities in trade and investment that will benefit not only the Philippines but also Japan and the entire region.

IV Collaboration for Economic Growth of the Region

8. Great potential for collaboration for regional economic growth lies ahead for both countries. The Philippines’ vibrant development backed by its political stability and sound economic fundamentals coupled with Japan’s initiatives for economic revitalization and as one of the leaders in the economic growth of the region are major driving forces for the growth of the Asian economy.

9. Both countries continue to enjoy a robust, dynamic and mutually beneficial economic partnership. Trade and investment relations continue to advance with Japan being the Philippines’ top trading partner and investment source. The complementarities of both economies provide the impetus for greater collaboration particularly in enhancing industrial competitiveness and human resource development. Both countries recognize that a good pool of quality human resources is important in sustaining the high level of economic activities in the region. The Philippines can contribute to Japan's economic revitalization by providing resources in sectors not limited to healthcare, manufacturing, and infrastructure. Further enhancement of relations between these two close and complementary economies of Japan and the Philippines, will lead to greater prosperity for both countries and the region.

10. The Government of the Philippines, through its commitment to sustain its efforts in improving its business climate, will contribute to its partners like Japan in gaining inroads in the integrated ASEAN market in recognition of the contribution of Japanese enterprises to the industrial development in the Philippines. The Philippines’ sizable and growing market and its high quality of human resources have encouraged the growth of Japanese enterprises in the country. The Government of Japan commits to support these efforts to the maximum extent possible including through development of Quality Infrastructure utilizing Official Development Assistance and through other modes of cooperation, including support for the further expansion of Japanese enterprises in the Philippines. More specifically, both governments will continue cooperation in the implementation of the “Cooperation Roadmap for Quality Infrastructure Development In the Transport Sector in Metropolitan Manila Area” as determined through existing approval processes, subject to the regular programming exercises of both governments, and depending on the financing requirements which includes the North-South Commuter Railway Project, Phase 1, with total project cost of approximately Three Hundred Billion Yen. Japan appreciates the Philippines’ decision to fully adopt the Japanese digital TV standard. As the first ASEAN country to adopt the standard, other countries in the region have been encouraged to also consider adopting the same technology. Both governments will advance other important cooperation on the terrestrial digital broadcasting using the Integrated Services Digital Broadcasting-Terrestrial (ISDB-T) standard and regular holding of the Industrial Cooperation Dialogue.

11. Recalling the contribution of the Japan-Philippines Economic Partnership Agreement (JPEPA) to the enhancement of bilateral economic relations, both countries will promote the implementation of the Agreement to further deepen the economic relations including through advancing the ongoing groundwork for the General Review. Both countries also reiterate the importance of regional economic integration through the establishment of the ASEAN Economic Community and economic partnerships such as ASEAN-Japan Comprehensive Economic Partnership (AJCEP), and the Regional Comprehensive Economic Partnership (RCEP) which also serve to lead regional economic development. The Philippine hosting of the Asia-Pacific Economic Cooperation (APEC) this year will play a major role in promoting integration process with focus on MSMEs participation in regional and global markets. In this regard, Japan extends its full cooperation towards success of the APEC Philippines 2015, including support to the Boracay Action Agenda to Globalize MSMEs.

12. Amid increasing and diversified global challenges such as terrorism, pandemics and climate change, both countries will act in a closer and coordinated manner in the international arena, and contribute jointly in the initiatives reflected in the “Action Plan for Strengthening of the Strategic Partnership” annexed to this Declaration including addressing natural disasters based on the lessons learned from past disasters such as the Great East Japan Earthquake and Super Typhoon Yolanda, with the shared goals of achieving human security.

13. Both countries reaffirm their strong commitment to ensuring maritime safety and security, including in the South China Sea, which is a vital element for peace and prosperity of the region including both countries. In this regard, the Philippines welcomes and supports the relevant views expressed in the G7 Foreign Ministers’ Declaration on Maritime Security issued on 15 April 2015. Both countries share serious concern on unilateral actions to change the status quo in the South China Sea including large-scale land reclamation and building of outposts which contravene the 2002 ASEAN-China Declaration on the Conduct of the Parties in the South China Sea (DOC). In this context, they emphasize that coastal states are required under international law to refrain from unilateral actions that would cause permanent physical change to the maritime environment in areas pending final delimitation. Both countries underscore the importance of peaceful settlement of maritime disputes based on international law including the United Nations Convention on the Law of the Sea (UNCLOS), which stipulates, among others, that any decision rendered by a court or a tribunal shall be final and binding. Japan reiterates its support to the Philippines’ use of arbitration procedures under the UNCLOS as such an action contributes to the maintenance and enhancement of the international order based on the rule of law.

14. In order to cope with various challenges facing the international community in a more effective manner, both countries share the recognition that it is necessary to strengthen the role of regional frameworks such as ASEAN, including the ASEAN Regional Forum (ARF), ASEAN Defense Ministers’ Meeting (ADMM), and ASEAN Defense Ministers’ Meeting Plus (ADMM Plus), and the East Asia Summit (EAS) as well as of relevant international organizations and thereby to utilize them even more effectively. In particular, they emphasize the importance of the UN Security Council to strengthen its representation, effectiveness and transparency, including through the expansion of both permanent and non-permanent categories. Both countries will closely cooperate with each other to achieve early reform of the Council. The Philippines expresses its continued support for Japan’s candidature for its permanent membership in the Council.

15. Both countries share their views that North Korea's continued development of nuclear weapons and ballistic missile programs poses a threat to the region and the international community, and confirm their continuing coordination to resolve outstanding issues of concern on North Korea. In this context, they urge North Korea to take concrete actions to meet its international obligations and commitments on nuclear and missile issues, and to address, without delay, humanitarian concerns, including the abductions issue.

16. With the aim of strengthening the Strategic Partnership, both countries will further advance information sharing and policy coordination and, to achieve this, enhance dialogue in extensive areas and at all levels including the dialogues between relevant authorities reflected in the “Action Plan for Strengthening of the Strategic Partnership” annexed to this Declaration.

17. The Strategic Partnership is rooted in the strong bond between the peoples of both countries, fostered through active people-to-people exchanges. Both countries look forward to the 60th anniversary of the establishment of diplomatic relationship next year and reaffirm the importance of enhancing exchanges among the youth who will further advance bilateral ties for the next six decades, including through initiatives such as Japan-East Asia Network of Exchange for Students and Youths (JENESYS2015). Recalling that this year is Visit Philippines Year, both countries will further promote two-way tourism utilizing the abundance of their tourism resources.

Benigno S. Aquino III
President of the Republic of the Philippines